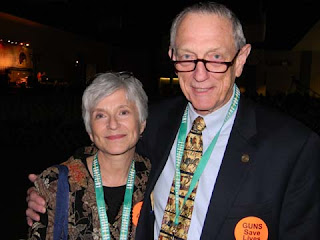 Former Speaker of the House Vance Wilkins and his wife at
October 2010 Tea Party Convention in Richmond. (Photo by Lynn R. Mitchell)

Vance Wilkins was Republican Speaker of the House -- an historic first in the Commonwealth -- for a little over two years before resigning in 2002 after allegations of misconduct. While serving as delegate from 1978-2002, he was instrumental in helping build the Republican Party into a majority that loosened the Commonwealth from its long-time Democratic grip.

Vance Wilkins' reemergence on the political landscape could be seen in 2007 when he was adviser to a candidate who unsuccessfully ran against Augusta County's State Senator Emmett Hanger (R-24th). Since that time, Wilkins has been seen working Republican events, most recently at the Republican Advance in December, and has been a moving force recruiting current chairmen throughout the 6th. Known in the past as conservative, he has in recent years lined up with the tea party wing of RPV.

Wendell Walker, who has served as chair in Congressman Bob Goodlatte's district the past three years, may have cause to be concerned. It's obvious Wilkins is putting his trademark tenacity to work as he pulls out the call lists of leaders and former leaders in the Sixth and works the phone to gain support. His hard work is legendary from the 1980s and '90s when he recruited and campaigned for Republican delegates, bringing a majority to the House. There's been no word yet from anyone who has received a phone call from Walker but he surely must be working his lists, too, in this battle that will culminate at the 6th District Convention on April 26th.

Anyone interested in attending the 6th Congressional District Convention will be required to attend their local committee mass meeting to become a delegate. Information for all committees can be found at the Republican Party of Virginia website. The Augusta County Mass Meeting will be held on Wednesday, March 5, 2014, at 6:30 pm at the Augusta County Government Center in Verona.

[Update: Word was received after this post was published that confirmed Walker has been contacting convention delegates and making the rounds of meetings in the 6th District.]
Posted by Lynn R. Mitchell at 2/18/2014 10:15:00 AM