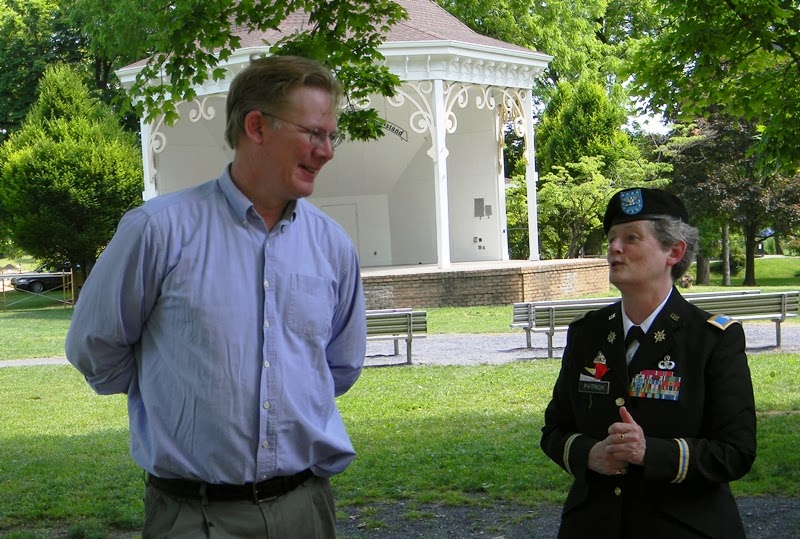 It happens at Staunton parades, Memorial Day ceremonies in Gypsy Hill Park, city council meetings, and other locations around Staunton.

"Hey, Lynn," comes the loud, cheerful voice, "how are you doing?"

That's the normal gregarious greeting I always receive from Staunton City Councilman Bruce Elder. Big smile on his face, he usually follows that with, "I love those pictures you took last week of [Staunton/Augusta County/back roads]. You really should put together a coffee table book," or, "You're a tourism ambassador for Augusta County."

I always thank him and then we talk about where the latest batch of photos were taken, politics (we are opposite sides of the political aisle), or a local event or upcoming elections. We've talked about how he came to land in Staunton from New England, his business, his family, and whatever came to mind.

He ran against my guy Chris Saxman a number of years ago for the 20th House District delegate seat. Chris prevailed in his reelection, and later Bruce went on to win a seat on city council where he is currently serving his second term. The last time I saw him several months ago was at Clocktower Restaurant in Staunton where I was having lunch with Councilwoman Andrea Oakes. Bruce was there on campaign business but excused himself and joined us for a while so I, of course, took a picture and posted it on Facebook.

The news of his cancer diagnosis came as a shock. He was in the middle of a campaign for the 6th District Congressional seat, and had promised that we would sit down for an interview along the way. The diagnosis has caused his withdrawal from the race.

On Wednesday he announced the cancer and his decision to step back from campaigning:

I want to beat Bob Goodlatte and represent the Sixth District in Congress, but I have to beat cancer first. Therefore I must sadly end my campaign, effective immediately.

On Christmas Eve I woke up and thought I had suffered a stroke; the left side of my face was paralyzed. After a trip to the emergency room, I learned that a growth was pressing against the nerves in my face, and it had to be removed.

I continued the campaign because the doctors were not sure if the growth was cancerous and there was the possibility that removal would solve the problem. The surgery to remove the growth occurred last week. That’s when I learned how serious this was.

The surgeon told me they got it “just in time”; the growth was cancerous. In the process of removing it, four of the main nerves in my left cheek were severed. It could be months before my facial muscles form new connections and allow me to smile and talk without discomfort.

Yesterday I learned I will need nearly two months of daily radiation treatments in order to make sure the cancer is gone. These treatments will leave me tired and make it difficult to speak or swallow.

Even then, I wanted to continue the campaign. So much work has been done in the last year, and so many relationships formed, that to bow out now would be such a great loss.

But I cannot continue. It will be months before I am able to talk normally, though I may never regain my pre-surgery abilities. I will not have the energy to campaign or even work for at least two months, perhaps longer.

I appreciate so much the support I’ve received in the last year and the opportunity I’ve had to talk about issues that matter to me and matter to the district and our nation: job creation, immigration reform, financial reform, protecting our water from fracking, and a higher minimum wage.

I am one of the lucky ones; I have insurance and an excellent team of doctors. I welcome your prayers as I beat this thing and join the millions who are cancer-free.

All the best,
Bruce