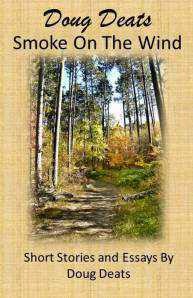 The request came through Facebook inquiring about one of my photos of Virginia. It was from Doug Deats who was writing a book, Smoke On The Wind. He lives in western Goochland County, Virginia -- that place in between Richmond and Charlotteville -- on Rasawek Hunting and Fishing Preserve. Check it out on Facebook. They provide guided hunt for quail and partridge on hundreds of acres of rolling hills on a managed pine plantation.

In his folksy way of telling a story, Mr. Deats takes his reader on adventures in the woods and along streams with tales of woodland creatures and events that take place in all seasons of the year.

As far as his book, if you look on page 61, you'll see a picture of summertime Virginia taken from Skyline Drive in Shenandoah National Park. It's mine. Mr. Deats contacted me months ago and asked if he could use that particular picture for his book. I was delighted to share it.

Last week a complimentary copy of "Smoke On The Wind" showed up in the mail. Inside was an inscription:


Lynn, thanks for letting me use one of your pictures. If was hard to pick just one but I thought this one said "Virginia" so I chose it. [signed] Doug Deats

The joy and honor were mine.

Like many of us who write about what we know, Doug Deats shares memories and stories. His reason? In his book he reveals:


As a writer I am like a magpie or a packrat collecting the shiny experiences of life and storing them away. For some I keep notes, most are stored in my memory, but some can only be hidden in the heart. I could label these under people, places, and things but they are almost always a combination. There are thousands of them and I bring them out as needed to complete an article or start a story. And then there are those I don't expose to the public because they are too personal but they are there anyway shaping how I feel and how I write.
...
I heard a preacher the other day say when we get to the other side we won't remember anything from earth. I hope that's not true because I have been blessed with the best of memories and the magpie in me would like to keep them and bring them out every once in a while for the joy of it.

Mr. Deats' words strike at the heart of many writers. His stories even more so. I think I'll settle back and read another one. If you're interested, read some of his writings that can be found From the Desk of Doug Deats. If you're so inclined, join me in reading "Smoke On The Wind" and be pulled into the world of Doug Deats.

Thanks Lynn for your kind words and your friendship. We are a blessed people indeed.