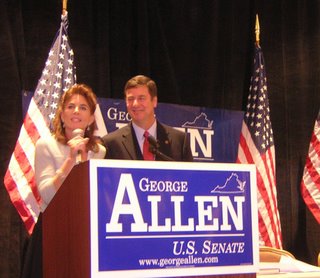 Loss by one-third of 1% not contested by Senator Allen
"I'm aware this contest is so close that I have the legal right to ask for a recount at the taxpayers' expense.... I see no good purpose being served by continuously and needlessly expending money and causing any more personal animosity."
- Senator George Allen, 11/9/06
I already miss Senator George Allen.

Yes, I know, he has a few more months in office before Jim Webb steps in ... but I am already having a difficult time imagining Virginia without this good man in the ranks of the Commonwealth's leadership.

My heart hurts for him ... and it's been difficult to think through it all during the past two weeks. One side of me feels as if I didn't work hard enough for him ... another side wants to blame unaware voters who didn't bother to go to the polls, expecting the Senator to easily win reelection again ... and then I wonder at those who cast a vote of "yes" for the Marriage Amendment but voted for Webb - did they not realize they were canceling out their Marriage vote since Webb made it clear it did not approve of it?

The Marriage Amendment received 160,000 more votes than Allen. All we needed was another 9,000 votes to send him back to D.C. I'm still pouring over Electoral Board figures and analyzing election data and will have a post on that at a later time.

It boggles the mind that the overwhelming majority of Virginia localities voted for George Allen and, yet, it wasn't enough against the heavily populated Northern Virginia and Tidewater areas.

I'm still shaking my head at the nasty campaign of personal destruction that was hurled out by the lib bloggers led by a blogger on the Webb payroll ... and apparently condoned by Jim Webb himself since he never reined them in or criticized their tactics.

And I'm still shaking my head at the Washington Post's outright support of Jim Webb in publishing 100 negative articles about George Allen between August and November ... is it any wonder Northern Virginia went with Webb?

My realistic side realizes politics have changed and will never be the same again. The dynamics of Virginia's voters are changing and those of us who are conservative have our work cut out for us.

My newspaper hero Ross Mackenzie, editor of the editorial page at the Richmond Times-Dispatch, has "A Disconnect in Virginia's Voting?" in today's Op-Ed section in which he asks:

As Mackenzie puts it, "Could Virginia's voters be at once brilliant and stupid?"

What your up against is civility, courage and a desire for intelligence in the public debate. Mr Never did anything or care about anybody else is going to be gone from the senate soon - thank goodness. Now watch what a senator who cares about integrity, issues and his constituents does for Virginia.

P.S. Their still accepting them old ways folks over in TN. Maybe you should get a moving...

Another anonymous posting ... someone who will not publicly stand up for his/her opinion.

Civility? From the Webb campaign? You have a selective memory.

Nice suggestion to move to TN ... I'll be staying put, thank you very much, to continue and work against the likes of you and keep Virginia conservative as she's always been.

Yes, with good conservative Democrats. Allen is the third 1 term Republican senator in the last 120 years. The only Republican to serve longer than 1 term is John Warner, a true Jeffersonian and conservative.

Conservative principals include not running up debt and respecting people's rights.

Maybe you can find Georgie a job since the only ones he seems to have had involved companies wanting political influence which he won't have anymore...

I don't understand Democrats ... you are the sorest winners I have ever encountered.

There is such as thing as winning with graciousness ... but I don't see it displayed very often in the Democrat ranks.

Look at George Allen - that's the picture of graciousness when he conceded to Jim Webb ... but what did Webb do? In his acceptance speech he called on the President to "publicly denounce the campaign tactics that have divided us rather than brought us together."

The campaign tactics that divided were employed by the Webb camp in their constant mud-slinging at Senator Allen and their lack of discussion of the issues. They couldn't win on the issues ... so they devised a distraction tactic to smear and avoid.

If Jim Webb had gotten less votes, I can guarantee you we would be in a recount situation now which would mean everyone's lives would still be on the campaign until the week of Christmas when the final count would be tallied.

George Allen graciously decided that, even though he was legally entitled to a recount, he would not put everyone through that.

Since 2000 I've seen bitter, angry, hate-Bush liberals. One would have thought that winning would change that mindset. You have proven the bitterness and elementary sniping remains even when you win.

The previous 1 term Senators were not beat, they retired. It is typical of liberals to make statements that are only partly factual. Bill Scott and Paul Tribble decided they had had enough of Washington DC. Too bad more liberals do not feel the same way.

I think the Shen Valley is changing and I think you will see this especially next year as Hanger and Cline will be in trouble and Landes, Saxman stay put.

The answer to the question on why marriage amendment passed yet Allen lost:

At the risk of sounding prejudiced, I am just going to put it out there; blacks voted for Webb and FOR the marriage amendment. Religious Democrats is our answer. Stupid too, imo, since there will be many black women affected by this amendment that ARE NOT gay.

So, Blacks are stupid, and religious. I see.

Liberals are miserable when they lose and unhappy and grumpy when they win. Go Figure. Perhaps they're simply never happy.