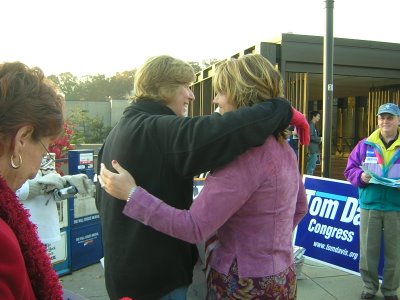 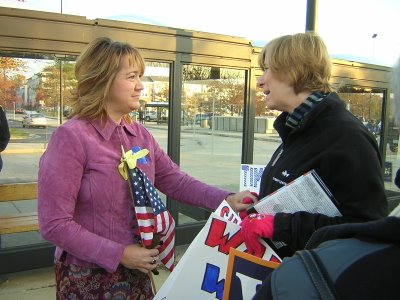 Military mothers with opposite political views

At long last Rhonda Winfield received the opportunity to meet Cindy Sheehan. Winfield, 39, of Stuarts Draft, has wanted to meet Cindy Sheehan since the summer of 2005 when Sheehan erected crosses in Crawford, TX, with the names of fallen military from Operation Iraqi Freedom including the name of Rhonda's son, Jason Redifer. The two have opposite political views and Winfield wanted to let Sheehan know she didn't speak for her family.

Winfield, who is a supporter of Senator George Allen, met Cindy Sheehan this morning at the Vienna Metro Station.

Winfield, whose son, Marine Lance Cpl. Jason Redifer, 19, was killed in Operation Iraqi Freedom on January 31, 2005, was able to give a copy of her book, "When Johnny Doesn't Come Marching Home: A Mother's Story of the Price for Freedom," to Sheehan which included an open letter to Sheehan. In the letter she expressed the opinion that Cindy Sheehan was not the voice of all Gold Star mothers and certainly not the voice of Virginians.

When Winfield met Sheehan, she said: "Cindy, I'm Rhonda Winfield and I lost my son in Iraq, too. You and I share completely different political beliefs and I don't understand how you believe some of the things you do, but we share grief as mothers and I've written my son's story in this book. I included a letter for you in it, and I'd like very much for you to read it and call me so we can sit down and talk about it."

Cindy Sheehan asked Winfield if she was a resident of Virginia to which Winfield responded, "Yes, this is my state and this is my Senator."

I suspect you will be busy the next few days, but I'd like to see if you could post the open letter from Rhonda Winfield to Cindy Cheehan. I would be very interested in reading it.