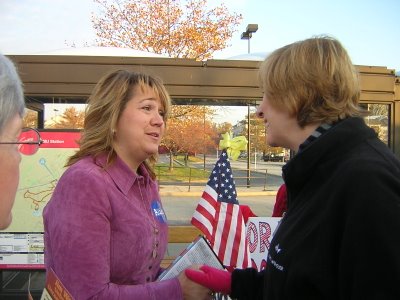 Gold Star mom Rhonda Winfield met Gold Star mom Cindy Sheehan this past Monday (see previous posting). At that time Rhonda gave a copy of her book to Cindy and asked her to read an open letter she had written to her.

Here is that letter from When Johnny Doesn't Come Marching Home: The Story of a Mother's Price for Freedom, p. 127, by Rhonda Winfield:

I am Rhonda Winfield, mother of LCPL Jason C. Redifer, USMC, who bravely and proudly gave his life for this country on January 31, 2005. I am still very much in the raw stages of my grief and have been extremely affected by the message you are sending out to our fellow Americans, as well as the rest of the world. I have watched, day by day, as you have continued to camp outside of our President's home in Crawford, Texas. I have listened to you explain to the media that you are the moral voice of America because yours is one of a mother who has lost a child. You present yourself as the true voice of those who have paid the most significant price of war and indicated that you are the spokeswoman for the broken souls of all grieving mothers. You were not, however, the recipient of the next of kin notice delivered to my household and while we perhaps share many emotions at this time, you do not speak for me.

While I defend a democratic system that allows our citizens to freely speak our minds, question our leaders when we disagree with their representation and hold those same individuals accountable for the decisions they make, I feel you have crossed the line. The final moment of tolerance came when you participated in erecting a display of crosses bearing the names of each felled service member whose lives have been given in Iraq to pay the price for such a freedom. You exercise the rights, which they have purchased for you, only to disrespect what you value so little as to exploit. While casualty numbers are facts, you have crossed a moral boundary in using the name of my son, as well as many others, to promote an agenda that he would be no part of. It is more than enough that his life was given to continue your ability to do just that very thing, if as an American you saw fit to do so. Must you further the pain of that fact for our family by soliciting his sacrifice for your purpose? He believed in nothing you stand for and it saddens my heart beyond words to know that he is, in death, being used as a pawn to empower your message.

My son was only 19 years old but knew what a precious gift freedom was and valued it enough to lay his young life down for that very thing. He volunteered for his duty knowing that there is always a human cost of war. He also was wise enough to understand that there would ultimately be a far greater human cost to avoiding this war. Let me remind you that Americans were attacked on our soil. Innocent countrymen whose only crimes were going about their daily lives were murdered that September morning and the evil forces that orchestrated and supported those horrific events, as well as the others that yet await us, must not be allowed to prevail. Jason knew that these terrorists must be engaged on their soil before we were forced to defend ourselves against them again on our own. He valiantly served to keep this from the doorsteps of our children.

We may not agree on the reasons that we are engaged in Iraq but we are there fighting nonetheless. Anti-American sentiment cannot be perpetuated by insisting on the rapid withdrawal of our troops from Iraq. The message that would be sent to the entire globe would have ramifications of a magnitude too severe for us to even comprehend as we sit here in our free, comfortable homes pontificating the current state of things. American troops have a job to finish there and they must remain until they do.

Cindy, I have spent many hours with the survivors of the incident that took my son, as well as many other brave young men whom I've met while visiting Bethesda Naval Hospital and Walter Reed Army Medical Center. I have watched the tears roll down their faces as they have watched the coverage of events that they have lived depicted in the media. My son's unit fought for six months in the "triangle of death," just south of Baghdad. Nine days before they were to return home, and on the final patrol of their mission, they were killed by an IED. The only two survivors of this brutal attack were not even aware of the details for weeks. They awakened after many surgeries and difficult medical procedures to be informed that they were the only survivors. They were obviously unable to even attend the funerals of the three men that had become such an important part of their lives. They remain hospitalized to this day. They will not only struggle with their physical disabilities but the emotional demons that will haunt them for the rest of their days. They do not understand why their lives were spared when their brothers were taken. They know only one thing for certain. They know this is not something that can ever be allowed to come to our streets. Please don't cheapen that degree of sacrifice, patriotism and selflessness by insinuating to America that you speak for us.

Without dispute, our sons were part of the price paid for our freedom to speak our minds. We both honor them by exercising those rights. Let's make sure we further honor them by speaking a message they would be proud of. We don't have to agree to be right in doing so. We all want our nation's children removed safely from harm's way. Let us unite in encouraging America to pray for a speedy victory, not a rapid withdrawal. Let us together remind our country that we are the Land of the Free, Because of the Brave and let us strive to remember that we are "one nation, under God." Freedom is never free. As it is said, "For those who have fought for it, Freedom has a flavor the protected will never know." Jason and Casey know.

Well, America obviously does not agree with Rhonda.

Anonymous (and it's interesting that the dissenters don't identify themselves other than "anonymous") - I disagree. If you were to talk to the American people directly, and if the mainstream media put the real story out about the war - it would be different. America DOES agree with Rhonda.

I will keep you in my thoughts and prayers.

Thank you, SWAC Girl, for sharing that. It is a very powerful message.

Thank you Rhonda, for all that you do. I appreciate you and I pray that more people like you would find the courage to speak out loud.
As a two time combat veteran and having served in Iraq, I will tell you that the men and woman will stand by our commitment to keep this Country free. Please, continue to use and enjoy that freedom. I know you will never forget where that freedom comes from.

I hope she put some pictures in it for Cindy......we all know Cindy cannot read...or think on more than a 4th grade level.

Rhonda, you are an inspiration to the american people, don't give those who would sully our soldiers ultimate sacrifice one inch. It is truely a shame that Cindy has chosen to degrade her own son in the manner she has.