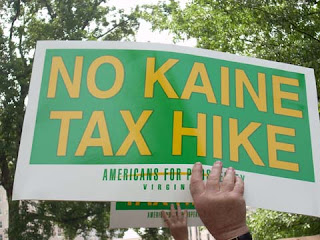 Three busloads of tax protesters from around the state arrived in Richmond Monday morning for an Americans For Prosperity rally to show disapproval for Governor Tim Kaine's proposed tax hikes for transportation.

Gathering around the Bell Tower on the Capitol Grounds, ralliers held signs during a press conference that was covered extensively by the press corps ... among then Richmond Times-Dispatch's Jeff Schapiro, Washington Post's Tim Craig, and TV stations from around the state.