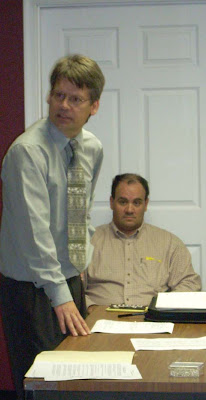 [Letter to the editor submitted to the Waynesboro News Virginian.]

In January of 2006, my family moved to Augusta County. As a Republican, I was delighted to see the “Win the War” signs and other pro-American indicators in the area. I soon learned that these encouraging conservative movements were championed because of the positive leadership of Augusta County Republican Party chairman Dr. Kurt Michael.

When it was revealed that an “adult book store” was going to open in Staunton, who acted in an advisory role to help the concerned citizens get court-tested laws in place? Kurt Michael.

On that same note, Kurt Michael has been leading the charge to get similar laws in place for the county of Augusta.

Where were these other “would be” leaders? Why were they not in the fight to champion traditional Republican values like pro-life, pro-family, pro-defense, low tax, responsible spending? Do they not support these standards? Are they opposed to Kurt because he does?

Unfortunately, I was out of state at the time of the chair election in April. My wife did attend. When I talked to her that night she described the first half of the meeting as a circus act of bait-and-switch. Not until the second half of the meeting, when Kurt Michael took the lead, did the meeting proceed according to good parliamentarian standards.

I am sorry to see Kurt step down.