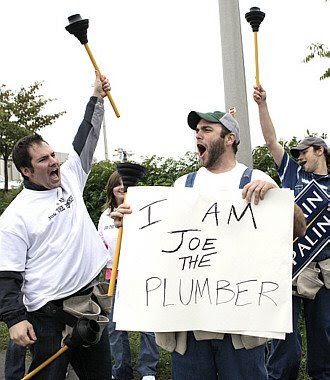 Joe the Plumber is all over the news and on poltical junkies' lips ... he's the new rallying cry for everyday working Americans:

As Democratic nominee Barack Obama pulled into the Roanoke Civic Center on Friday, he was greeted by the usual McCain campaign supporters that show at Obama rallies. But this time, those waving McCain-Palin signs were joined by dozens of people waving standard-issue plungers. Some wore white t-shirts emblazoned with "I AM JOE THE PLUMBER" on the front. The protesters all said they were volunteers and not paid by the McCain campaign.

Email ThisBlogThis!Share to TwitterShare to FacebookShare to Pinterest
Labels: Joe the Plumber, McCain-Palin 2008