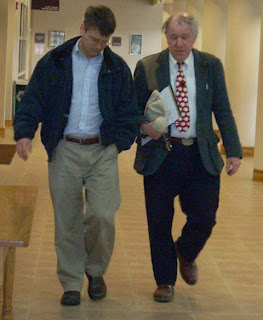 Heading to the Board of Supervisors meeting. 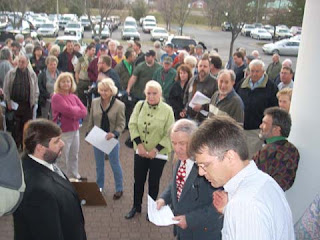 Francis Chester holds petitions handed to him by those in the overflow crowd outdoors at the Government Center. 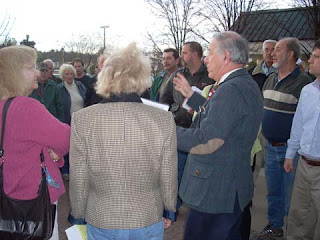 Mr. Chester addressed the overflow crowd outside the Government Center and thanked them for coming out while apologizing that they were not able to get inside. 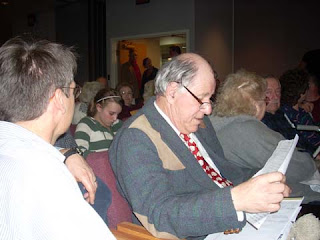 Going over notes before the meeting....

Six weeks ago, two old adversaries shook hands and agreed they were on the same side of the real estate assessment issue in Augusta County ... roll back current assessments to 2005 values.

Churchville attorney Francis Chester and Pastures Supervisor Tracy Pyles overlooked past differences to work together for the citizens of the county at a time when both were seeing many in distress who had lost jobs, lost homes, were on fixed incomes, and were having difficulties during a financially turbulent time.

Working pro bono, Mr. Chester spent hours at his law office and at home going through law books, talking with citizens, returning phone calls to other areas of the state, researching and preparing for his presentation before the Board of Supervisors on Wednesday and, now, going to court.

The message that probably came through the loudest from residents was their feeling that no one in government was listening ... no one cared. In Mr. Chester they found someone who not only listened but who also cared.

They are thankful and have been vocal in saying so.