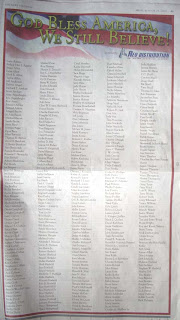 Talk about putting your money where your mouth is! Mr. Hatfield took out a full-page color ad on page A9 in the Friday, March 27, 2009, edition. The cost of the ad was $2,400. The page was outlined in red with the words, "God Bless America ... We Still Believe!" across the top against the background of a red, white, and blue American flag.

Across the page, top to bottom, were five columns of names of people in the community who also believe that God blesses America and joined with Mr. Hatfield in publicly saying so.

I asked Reo about the reason behind the ad, keeping in mind that he had run patriotic ads in the past. Reo's response:

"I had enough of the government telling the majority of the people that God isn't important.... We are Americans and we have built a country on Truth, Justice, and Freedom ... and 90% of Americans believe it but we can't get the message out. I finally said, 'I am getting the message out.' I love this country and I am ready to fight to keep it."

One patriotic man ... one patriotic newspaper. Together they reminded us of what made this a great country.