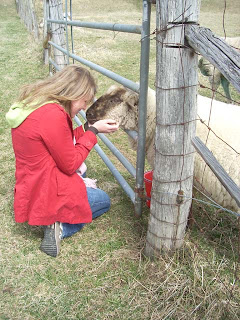 SWAC Daughter made a friend....

It was a family outing as we headed out the door early Saturday morning to hit Rt. 250 on our way to Highland County for its 51st Maple Festival and to drop in on friends who have a sheep farm in Blue Grass. The kids wanted maple pancakes for breakfast, maple chicken for lunch, maple donuts and maple funnel cakes for snacks, and everything else that makes a trip to the Maple Festival a memorable event.

It was sunny and cool -- coats and gloves warded off the cold -- as we strolled the streets of Monterey, stood in line for the famous Mill Gap Ruritan Club maple donuts, and ran into friends and family.

Standing in the donut line ahead of us were Augusta GOPers Larry and Barb Tillett with their friends, which was a pleasant surprise seeing their familiar faces. At the rescue squad building we ran into my step-brother and his wife who live near Williamsburg, another pleasant surprise. I had no idea they were going to be in Highland, and the chances of not running into each other in the crowds that had filled the sidewalks and spilled over into the streets were incredibly high.

As we walked the main street of Monterey, traffic could be seen stopped on Rt. 250 up the mountain, sitting at a complete stop. We later heard it was backed up 3-4 miles; one couple we ran into said they sat in line 45 minutes waiting to get into Monterey. I was glad we had been ahead of the traffic.

We hit the back roads and toured sugar camps, took photos of the mountains and valleys, and interacted with the critters ... sheep, a donkey, horses, a llama, and a sheep guard dog named Lucky who has lost only one sheep to a coyote on his watch. SWAC Daughter bonded with the sheep pictured above, a people-friendly ewe on a sheep farm.

At the end of the day we stopped in McDowell to check out the Stonewall Ruritan building and visited with Churchville attorney Francis Chester and his family at their Cestari-Chester Farm booth ... and then began the 45-minute drive home up and over the mountain.

What a wonderfully relaxing day in the beauty of the Highland mountains. I'm ready to go back....

Sunday is the last day of this year's Maple Festival ... great weather is on tap and there will probably be crowds again so head over early and get in on the fun before it's gone!
More photos will be posted....