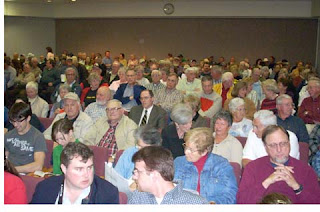 ~1,000 citizens attend Board of Supervisors meeting~
~Over 10,600 signatures collected on petitions ~
~50 landowners address Board ~
~ Citizens turned away because of huge crowd~


Wednesday's Augusta County Board of Supervisors meeting was amazing on several levels. What could be billed as Augusta's tax revolt brought citizens together to ask supervisors to roll back their assessments to 2005 values.

First, We the People came out en masse to an organizational townhall meeting on February 3, 2009, as 600 citizens packed into Verona United Methodist Church to hear from Supervisor Tracy Pyles and Francis Chester to learn how to make their voices heard in the real estate assessment issue.

Second, We the People came out en masse -- 1,000 strong -- to the Board of Supervisors meeting on March 11, 2009, to speak up and show support for Churchville attorney Francis Chester who called on the board to roll back assessments to 2005 values.

Even though the Government Center had been told a huge crowd was expected, they did not feel it necessary to move the proceedings to a larger venue. As a result, the board room filled quickly, then two auxiliary rooms set up with monitors filled, and then the hallways where chairs were set up and small audio speakers allowed some to hear the meeting.

The remaining folks, estimated at up to several hundred, were left outside. Others reported they drove by, saw the crowd, and left. The large turnout was an indication of taxpayer frustration, many who feel their tax money is wasted by their government. One citizen wrote a letter to the editor saying he was upset at the supervisors' lack of planning for the large crowd. A local Patrick Henry was there holding a "Don't Tread On Me" flag.

Third, 50 citizens addressed the board. Forty-nine disagreed with the increased real estate assessments ... only one agreed with them. Speakers were given one minute to state their case, five minutes if representing a group. When Churchville attorney Francis Chester asked for 10 minutes and was told he could have five, he held up the stack of petitions consisting of 10,000+ signatures and asked for one minute per thousand signatures. He got his 10 minutes.

Fourth, over 10,600 signatures were collected on petitions that were circulated countywide. The petitions, asking supervisors to roll back assessments to 2005 values, were taken by citizens who carried them to work, to their neighborhoods, and families; 30+ businesses displayed them; Tractor Supply, with a finger on the pulse of the farming community, invited Augusta Citizens Against Unfair Assessments to join their Community Days on February 14th to collect petitions, and they displayed petitions on the counter for six weeks where hundreds of signatures were obtained. Jake's convenience store on Rt. 250 between Staunton and Churchville, a popular spot for Subway sandwiches, coffee, and gasoline, collected hundreds and hundreds of signatures. The petition drive was a movement that carried itself.

Fifth, volunteers offered help in ways that were much appreciated by all involved. Some offered background on the current finanical climate. Others sent assessment information. They are still volunteering as Phase II of this effort gets underway with plans to carry a lawsuit against the supervisors in Augusta Circuit Court.

Sixth, the media's coverage of the BOS meeting provided information for citizens who could not attend, and follow-up for those who did. The Staunton News Leader had a live feed on their website that was viewed by many including one activist who emailed that he and others watched on the computer, reacting along with those who were on-sight at the meeting. The Waynesboro News Virginian was there as well as NBC-29 and WHSV TV-3. Pat Jarrett, a photojournalist with the News Leader, snapped many photos that are on display on their website. Eighty-One magazine weighed in on the subject as did Nelson County Life magazine. Finally, four local bloggers were in attendance and covered the meeting with commentary and photos: Yankee Philip, The Journey, Augusta Water Cooler, and SWAC Girl.

The Board of Supervisors voted down the request to roll back assessments to 2005 values. What is next?

Wednesday was a microcosm of what is occurring across the nation as concerned citizens aka The Silent Majority begin to take action against elected officials who are perceived as not listening to citizen concerns and needs. While Americans are tightening their belts in economic hard times, government continues to spend, spend, spend.

Tax revolts -- tea parties -- are springing up across the country, and many are planned for April 15 including one in Shockhoe Slip in downtown Richmond.

There is a groundswell of discontent among those who pay taxes and feel those taxes are increasingly squandered by the government. Tough times have hit Americans, something that is evident in the SWAC area of Staunton, Waynesboro, and Augusta County after local companies laid off hundreds of employees ... Invista, Mohawk Carpet, American Safety Razor, Gem Ply, Unifi, Hershey ... as home prices dropped 18% the last quarter of 2008, as housing starts dropped to their lowest level since 1959. Baby boomers have seen half their retirement savings disappear as the Stock Market dropped ... others lost their investments.

The next Board of Supervisors meeting is Wednesday, March 25, at 7 pm at the Government Center. Supervisor meetings are held the 2nd and 4th Wednesdays of each month. This is the time to keep an eye on your elected representatives as they begin to discuss the budget and other issues that will involve your tax money.

Together, Augusta ... we can make a difference!