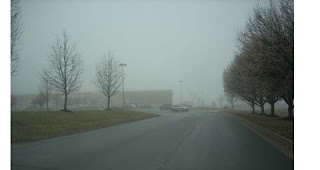 Kohl's in Harrisonburg was fogged in this morning.

It was a foggy day in the Shenandoah Valley which made it feel much cooler than the thermometer read. Some ramblings as I watch the fog thicken and the rain begin again this evening....

We trekked to Harrisonburg this morning to shop. The college town is always bustling and today was no exception....

SWAC Daughter had to turn in rental snowboard boots and pay for the bindings which were perfect. The ski shop had a great sale on boots but none in the right size. Now begins the long recess until the snow flies again next season....

After shopping, we lunched at Chick-Fil-A which is a favorite for our family. Since we don't have one in Staunton, it's always a treat.

Early afternoon found us meandering the back roads to the Green Valley Book Fair at Mt. Crawford. This is the last weekend until they reopen again from May 9-25. I found political books ... surprise ... while SWAC Husband looked for Vietnam, World War II, and historical books ... SWAC Daughter went for history books also....

We are now back home and in for the evening with a kettle of 16-bean soup on the stove, a fire in the woodstove to ward off the chilly air, and the next two episodes of "John Adams" to watch as we settle back and continue this entertaining series telling of America's formation as a free nation....

A tip of the hat to the Waynesboro News Virginian for their mention of SWAC Girl in the "Three UP" portion of their weekly "Three UP, Three DOWN" column. Thanks for the mention, NV, about the bus trip we are trying to organize to attend the Richmond Tax Day Tea Party on April 15:

As the Obama spending train rolls on, uproar is building, evidenced by TEA PARTIES by the hundreds being planned for Tax Day, April 15. SWAC Girl blogger Lynn Mitchell is corralling locals for a trip to Richmond. This is freedom of speech in action. This also signifies that a growing number of people recognize the dangers of the new president’s economic elixir: rampant spending and lost freedoms — the two always correspond.

If anyone is interested in joining us for the trip which will cost $21 per person (no driving, no parking issues ... fellowship with like-minded Valley folk on the drive), send an email. If we have enough interested folks, a bus will be booked so let's fill the bus!

It's spring in the Shenandoah Valley....