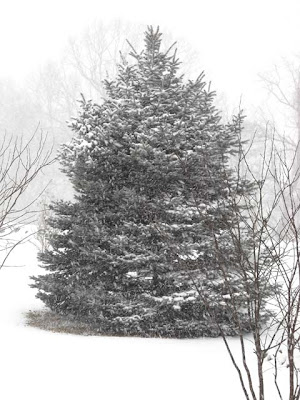 The alpine spruce is majestic in the latest snowfall. 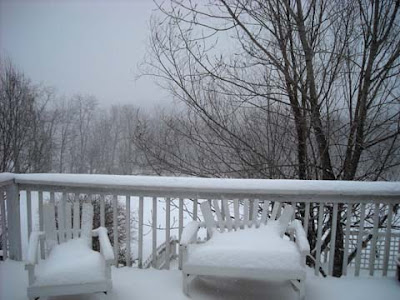 Snow is falling so heavy that the ridge behind the house is not visible. 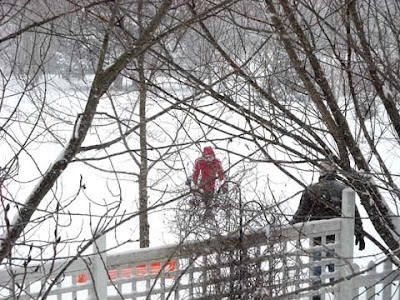 SWAC Daughter walks up hill with her snowboard as others use the sled. 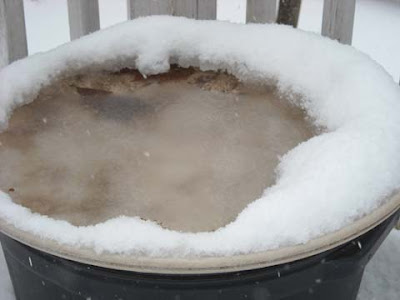 How cold is it? It's so cold that the heated birdbath has slushy water in it. Temperature at mid-day was 15 degrees.

Something tells me Mike isn't crazy about the snow today. Meanwhile, we're yipping at our house ... SWAC Daughter is heading into the back yard with her snowboard as the flakes continue to fall.

With the woodstove cranked (because the temperature is mid-teens at 1:00 pm ... brrr), I've got a roast and veggies cooking and we have apple cider and hot chocolate to warm us up.

Snow is still falling heavily so we ventured outside to take photos and watch SWAC Daughter surf the back yard. The snow was mid-calf on me and in five minutes I was completely covered. The wind chill is in the single digits and it is cold!

It's definitely a snowy winter day and we're enjoying it in the Shenandoah Valley....

Update: Mike wrote to say they have a birthday party tomorrow for one of the boys so this snow is gumming up the works. I understand ... this would put a damper on something like that. They could let the kids make a birthday snowman for his son complete with party hat and balloons tied to its stick arms for a birthday to remember.

Meanwhile, Bob has taken snow photos in his part of Augusta. Gorgeous.

Update #2: Many thanks to Pat Austin at And So It Goes In Shreveport for the link.

Email ThisBlogThis!Share to TwitterShare to FacebookShare to Pinterest
Labels: snow in Shenandoah Valley

We've got a birthday party planned for Sunday afternoon. (the youngest will be nine). Less snow would be better for me.

Get Pictures! I can't believe this 'ski resort' picture from my own back yard!

Hey -- I know! Have a snowman party! All the kids come dressed for the snow and build a snowman in honor of your son's birthday! Birthday hat on his head, balloons attached to his stick arms ... it would be a birthday to remember. :)

Pat, thanks for the link and the kind words!