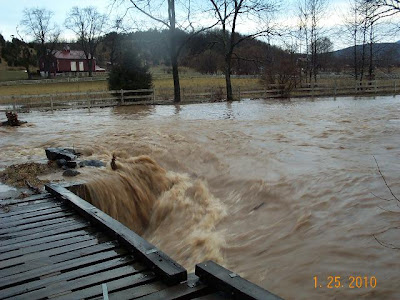 Flooded bridge in western Augusta County.
The past 24 hours have seen downpours in the Shenandoah Valley with a flash flood warning in effect until 2:00 p.m. Monday. A neighbor who lives on a nearby stream sent these photos and commented:
"I kept hearing a noise [during the night] that I couldn't identify in between downpours. Finally, about 5:30 this morning, it dawned on me that I was hearing running water. LOTS of running water!!! A quick drive down to the bridge confirmed what I suspected." 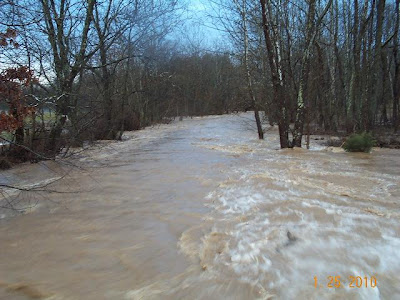 This is the neighbor's creek after 24 hours of rain. Because of extreme flooding, Augusta County public schools are closed as well as Nelson, Rockingham, Rockbridge, Madison, Orange, Page, and Shenandoah counties. 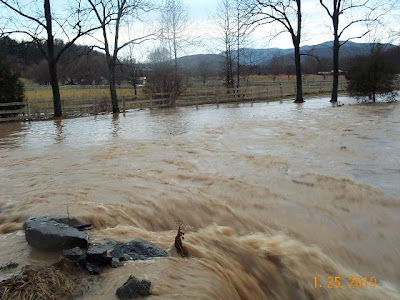 Rushing water has caused streams to flood over their banks which will likely cause road damage. 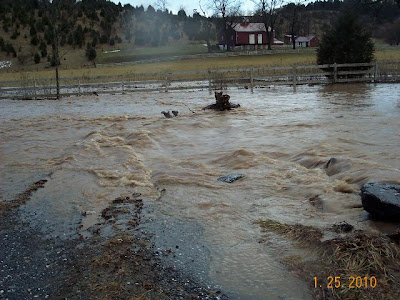 Roadway is completely under water. 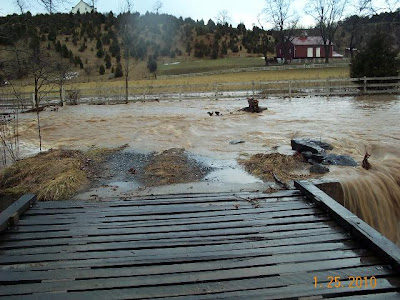 My neighbor says it usually take 7" of rain to make the creek flood that way. Someone else was saying this was the worst he had seen since the hurricane of 1996.

Thankfully SWAC House is on a ridge in the Shenandoah Valley so when flooding comes along, we are usually spared the worst of it. My neighbor down the road lives alongside a creek and sent these photos this morning, taken after the sun came up and he could see what was going on. My thanks to him and hope they remain safe.

Our electricity has been blinking all morning ... it finally went out as I wrote up this post but came back on so I'm hurrying to get this up before the electricity goes out again. The wind has picked up ... trees may be leaning on electrical lines.

Sunday saw a high of 38 degrees but overnight the temperature rose to 54 degrees. Daytime temps are to remain in the 50s but will drop into the 20s tonight.

Streets and roads are closed all over the place. Emergency authorities are warning to be careful of flooded roadways and bridges. Flash flood warnings continue. And the neighbor who sent the photos? He cannot get across the creek to go to work today.

It's still winter in the Shenandoah Valley....

Email ThisBlogThis!Share to TwitterShare to FacebookShare to Pinterest
Labels: flooding in Shenandoah Valley