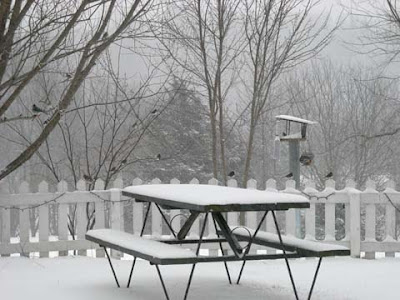 The bird feeder is busy this morning as cardinals, blue jays, titmouse, and juncos gather in the heavy snow. Juncos sit on fence pickets like yard ornaments. The birds like to gather under the picnic table out of the driving snow so we scatter bird seed there for those who don't want to be in the feeder.

It's a snowy day in the Shenandoah Valley ... 12 degrees out there ... and snow is all over the Commonwealth as a winter storm that had marched across the country zeroes in on the east coast.

The Weather Channel even suspended their Friday afternoon "Storm Stories" to actually cover the weather since so many were affected, and this morning snow is steadily falling in western Augusta County.

I love a snowy day. The world slows down ... outside the only sound is the occasional soft scratchy sound of falling snow and birds at the feeder.

As I look out the window, the back yard is filled with cardinals, blue jays, titmouse, and juncos in the trees as they take turns at the smorgasboard ... snow is falling heavily coming in from the north with about 3" already on the ground.

Richmond is expecting a foot of snow so SWAC Niece will be enjoying her own Snow Day. It sounds as if the brunt of this southern snowstorm will be the southern and eastern parts of Virginia. I'm checking Weather.com for updates and radar. The Weather Channel talked with Andy Doernen from WRVA Radio in Richmond during the 7:00 hour to get the latest conditions there.

Email ThisBlogThis!Share to TwitterShare to FacebookShare to Pinterest
Labels: snow in the Shenandoah Valley

As Greg said, "Another 5 inches of global warming!" I used it for my facebook status.