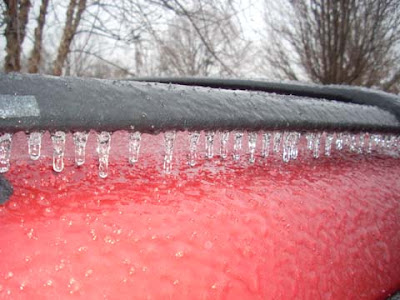 Students and teachers in Augusta County schools will have a three-day weekend with today's closing due to ice, sleet, and snow while Staunton and Waynesboro schools were reportedly opening two hours late. Check here for additional closings and delays.

WHSV is reporting that buses from St. Francis of Assisi were canceled for those planning to attend the March for Life today in Washington, D.C.

As liquid precipitation continued to fall at sunrise, the temperature hovered around 30 degrees and many secondary roadways were reported to be slick because all surfaces could not be pre-treated due to the cold rain that began the latest round of winter weather.

*** A Winter Storm Warning has been issued for Augusta, Rockingham, Highland and Pendleton counties until 1 p.m. Friday. Grant and Western Mineral counties are also under a Winter Storm Warning from 7 p.m. Thursday to 6 p.m. Friday. Ice accumulations of a quarter of an inch and snow/sleet accumulations of one to two inches are possible. A Winter Weather Advisory is in effect for Shenandoah, Page, Frederick, Warren, Clarke, Hardy and Eastern Mineral counties from 7 p.m. Thursday to 6 p.m. Friday. Some ice accumulation is possible. Some areas may also see up to four inches of sleet or snow. ***

Keep up with all the weather conditions in the central Shenandoah Valley throughout the day.

Email ThisBlogThis!Share to TwitterShare to FacebookShare to Pinterest
Labels: winter in Shenandoah Valley