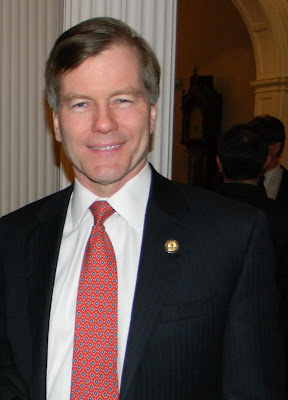 
"America needs leadership and that's what governors do: they lead," McDonnell is quoted in a press release from the Romney campaign. "Governors actually have to find solutions and bring all parties together in order to get results for their citizens – they can't just sit back and cast votes.

"Mitt Romney has been an effective leader his entire life, in business, the Olympics and as governor. President Obama’s lack of leadership experience is now clear – he has failed to turn around the economy and end the gridlock in Washington. Mitt Romney used his leadership ability in a politically difficult environment to balance the budget every year, cut spending and taxes, and create jobs. He is a results-oriented conservative. This is the type of record that conservatives like me are honored to support – we need a leader like Mitt Romney in the White House to enact effective change that will put our country back on the right path and Americans back to work.”

The South Carolina primary is Saturday.

Virginia Governor Bob McDonnell will throw his support behind Mitt Romney today, according to reporter Olympia Meola with the Richmond Times-Dispatch. McDonnell's name has been bantered about for a while as a possible Vice Presidential candidate for Romney. Even as far back as last winter, some were whispering his name along with "president" or "vice president." Meola wrote:


McDonnell's support could significantly boost Romney's chances in Virginia if he wins the party's nomination. President Barack Obama was the first Democrat to win Virginia's electoral votes since President Lyndon B. Johnson in 1964. Obama is expected to make a push in the state again this year, and his campaign released a TV ad in the state this week.

Lieutenant Governor Bill Bolling is Romney's campaign coordinator for the Commonwealth so the team of Bob and Bill would be working together again, something they have done well over the years.  Virginia voters will have a 50-50 chance while voting in the presidential primary on March 6 because only two candidates, Romney and Ron Paul, qualified for the ballot.

McDonnell, who was in South Carolina earlier this week, is expected to return today and spend the next twenty-four hours campaigning with Romney and SC Governor Nikki Haley who has also endorsed Romney.

McDonnell, who is chairman of the Republican Governors Association, has made clear he believes a governor would be best in the position as President of the United States. After Texas Governor Rick Perry's departure on Thursday from the race, the only governor left is Romney.