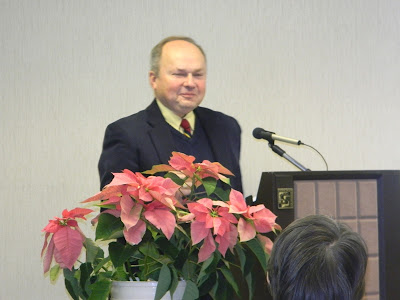 His remarks were in praise of those who have worked hard making the library a successful go-to destination in the community but he was also funny, cracking up those in the room as he recited American poet emily dickinson ... she of lower case letters and no-title poems.

Ten years earlier, addressing the opening ceremony of the library, Supervisor Pyles quoted emily dickinson's poem praising the wonders of books and their amazing ability to sweep us away, hopping from destination to destination with no limits on where we can go:

There is no frigate like a book
To take us lands away.
Nor any coursers like a page
of prancing poetry.
This traverse the poorest may take
Without the oppress of toll.
How frugal is the chariot
That bears the Human Soul.

He noted there is no port like a library, observing that libraries are no longer limited to just books but offer other "frigates" to transport us to faraway destinations, and then updated the first two lines of Ms. Dickinson's poem to laughter from those in the room:

How libraries have changed in the past ten years, now offering many choices not available back then such as eBooks, computer stations, online reservations for books, wireless internet for patrons at all branches, free computer introduction classes, and much more.

The library patrons, staff, and volunteers who are very aware of how much technology has changed since 2002 got a kick out of Tracy's 21st century spin on a 19th century poem.

On a personal note, I'd like to thank Supervisor Pyles for my recent appointment to the Board of Trustees for the Augusta County Library. To paraphrase Dr. Seuss, "Oh, the places we'll go!"
Posted by Lynn R. Mitchell at 1/23/2012 11:00:00 AM