Tracy Pyles, new Chairman of Augusta County Board of Supervisors 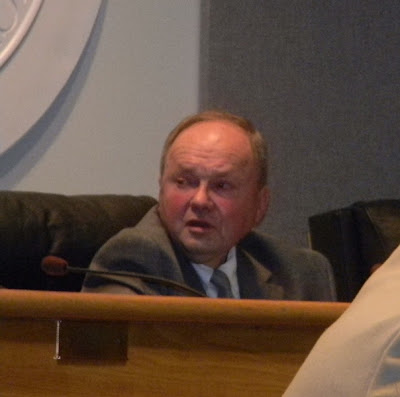 His wife, Debbie, two of his three sons, and baby grandson Caleb watched from the audience. I think his old friend, the late Republican Supervisor Orvin Kiser, would be proud of this new chairman.

In taking over as chair, Tracy talked about working together with the challenges that are to come. Chairman Pyles held up two oversized checks to illustrate money spent by the county as required by the Commonwealth that could have been used to hire more deputies or fire personnel for citizens in Augusta County.  A fiscal conservative -- I've call him "Mr. Numbers" for years -- he started out of the block by talking about fiscal responsibility. He wants this board to be good stewards for the people of the county. As if he recognized his grandfather's voice, little Caleb talked back, much to my amusement.

As a fellow fiscal conservative, I'd like to say congratulations to my supervisor on his chairmanship. I look forward to seeing where this board will go during the next four years.

Reporter Bob Stuart at the News Virginian wrote about the meeting and Tracy becoming chairman, and Calvin Trice covered it for the News Leader.

You were fighting this battle from the beginning. Thank You!