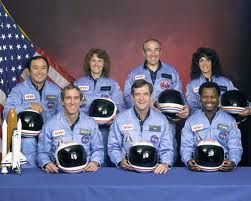 Has it really been 26 years since the Challenger shuttle exploded in mid-air? Seven lives were lost, the tragedy was caught live on TV, and Americans were shocked at the disaster that had taken place in front of their eyes.

Space launches had become so routine to most people by the time Challenger came around that it rarely caused much excitement. Indeed, on that fateful day of January 28, 1986, it was cold and wintry in rural North Carolina, just as it was cold at the site of the launch in Florida. At home with my two-year-old son, I remembered the NASA launch was taking place that morning so turned on the television to see how it was going.

TV cameras scanned the spectator stands at Cape Kennedy where family and friends of the astronauts watched, full of excitement in anticipation of the launch that included Christa McAuliffe who was there as part of the Teacher in Space project. Millions of children across the nation sat in classrooms watching and waiting for the launch with expectations of experiments and lessons later during the journey from the teacher in space.

McAuliffe's participation was what made me particularly interested in this launch. She was a teacher and wife but, more importantly, the mother of two young children, ages six and nine. She had spent long months away from her family training for the Challenger mission which made me realize I would not have been able to make that sacrifice, but I admired her determination and the support of her family.

I tuned in to watch that morning, saying a quiet prayer for their safe journey as my son played on the floor. Everything was routine with the countdown and there was lift-off. Cheers rose from the crowd of spectators as they took photos and watched the shuttle lift higher and higher until NASA Control gave instructions for full throttle-up.

There was an immediate explosion that filled the sky. For those in the stands, the looks of joy turned to bewilderment as they realized something wasn't quite right. Some gasped, some screamed, others simply watched in disbelief. Was it merely a reflection of the sun or perhaps just a vapor trail? There was confusion in the stands. Seconds later came the fateful words from NASA that there was "obviously a major malfunction," followed with, "... the vehicle apparently exploded."

Video of the launch shows the reaction of family and friends as the realization began to set in that they may have just witnessed the death of their loved ones. As they anxiously scanned the sky overhead, America watched their anguish. It was the first time a NASA tragedy had been caught live on TV.
The biggest fear of disaster had come true just at a time when everyone felt relaxed and comfortable with space travel, letting their guard down to the fact that riding a hydrogen tank into space was still a dangerous and challenging endeavor.

Later in the day, President Ronald Reagan addressed a shocked and stunned nation as he remembered the lives that were lost and the families left behind. He reminded America that we were still pioneers in space travel and then addressed the school children who had witnessed such a sad event, gently telling them that sometimes painful things happen when men take chances to expand their horizons. He continued by saying that the future didn't belong to the faint-hearted but, rather, to the brave.

The president then added words that would move a nation, saying that the astronauts had "slipped the surly bonds of earth to touch the face of God," bringing tears to millions who had shared in the dream of six astronauts and a teacher in space.

Twenty-six years later, many still remember the day we lost Challenger. The young school children who watched in classrooms are now in their 30s. Others, like my children, were too young or were not born at the time. Challenger, however, is a chapter in our history that will not be forgotten, a reminder of the loss of seven space pioneers who helped pave the way for those who followed.