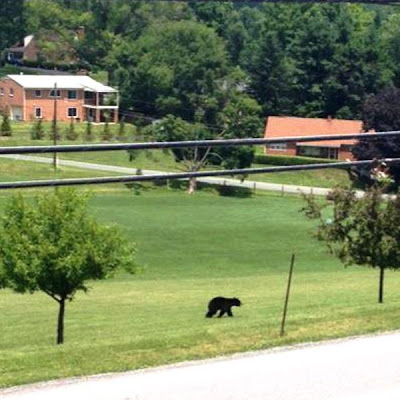 With the active black bear season this year in the Shenandoah Valley and surrounding mountains, it was only a matter of time before a bear was spotted in Staunton. Sure enough, that's what happened today as reports of a bear began surfacing around the middle of the day. The photo above was taken on North Augusta Street across from the Mary Baldwin College campus where the bear was seen on campus making its way toward Statler Boulevard.

I was talking with wildlife biologist and longtime friend Al Bourgeois from the Virginia Department of Game and Inland Fisheries as we sat at dinner last weekend at a wedding in western Augusta County. He is one of the resident bear experts who has dealt with bears in this area for years. He said it has been a very active season as the hungry critters are roaming looking for food and, since there is very little natural food just yet, some are making their way to populated areas sniffing out garbage, bird feeders, and other edible goodies.

Bears are not unusual in this part of Virginia, and each year there are incidents with some years busier than others. This is one of those busy years.