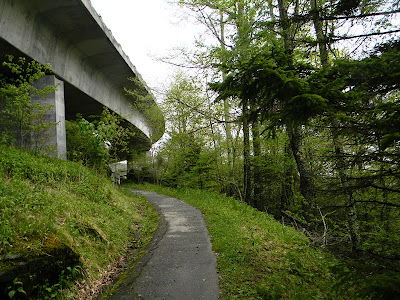 We lived 12 years in Iredell County, NC, about an hour north of Charlotte where SWAC Husband worked before we transferred back to Virginia. During those years, we spent a lot of time in the Blue Ridge Mountains, most often around Blowing Rock and Boone. While living in that area, the viaduct was finally constructed at Milepost 304 around Grandfather Mountain south of Blowing Rock, an engineering marvel engineered to fill in the missing link of the Blue Ridge Parkway. 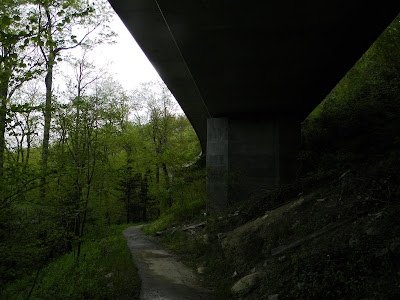 In May, as we traveled back from a week on Florida's Panhandle spent with family, we meandered the Blue Ridge Parkway from Asheville to Fancy Gap. Along the way, we stopped at the Linn Cove Visitor Center and walked the trail that goes under the viaduct to get a closer look. 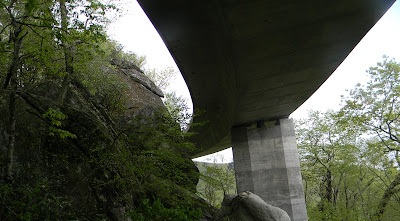 It took eight years, completed in 1987, and cost $10 million to construct this cement segmental bridge that was used to protect the fragile alpine environment on Grandfather Mountain. Walking beneath the structure offered the opportunity to observe how man and nature came up with a compromise in this national park area. 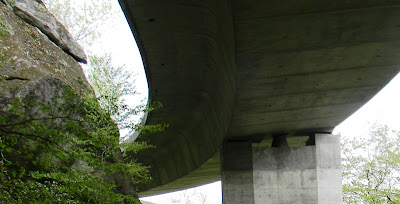 From Wikipedia: "Linn Cove Viaduct is a 1,243-foot (379 m) concrete segmental bridge which snakes around the slopes of Grandfather Mountain in North Carolina. It was completed in 1987 at a cost of $10 million and was the last section of the Blue Ridge Parkway to be finished.


The viaduct was needed because of the damage that a traditional cut-and-fill road would have caused to Grandfather Mountain. The viaduct was designed by Figg and Muller Engineers, Inc. Construction began in 1979. It is 1,243 feet (379 m) long and consists of 153 segments weighing 50 tons each. The bridge's segments were precast at an indoor facility at the south side of the parkway. After being transported to the bridge site, each section was lowered into place by a custom crane placed on either edge of the existing structure. The only work done at ground level was drilling for the seven footings which support the viaduct. In particular, there was no access road other than the Blue Ridge Parkway itself. The bridge has received eleven design awards." 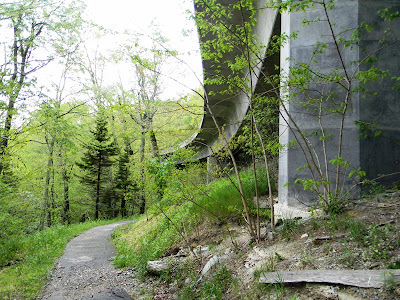 I took multiple photos from various angles as we walked the trail. 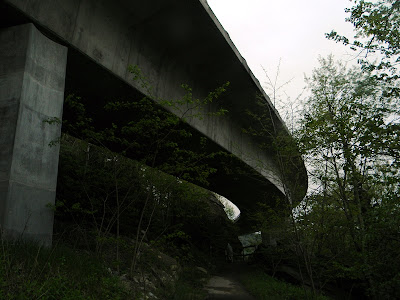 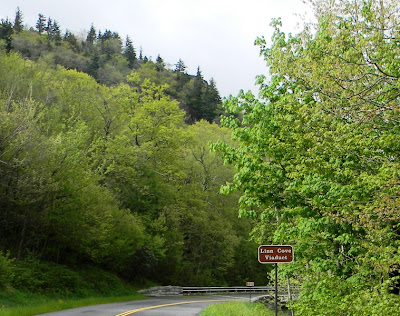 This is the view from the Parkway at the beginning of the viaduct on the south end. 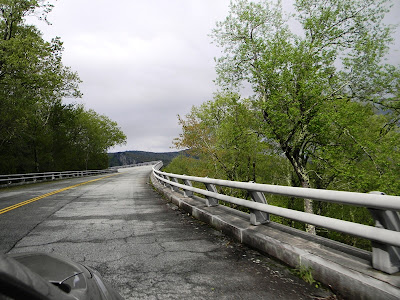 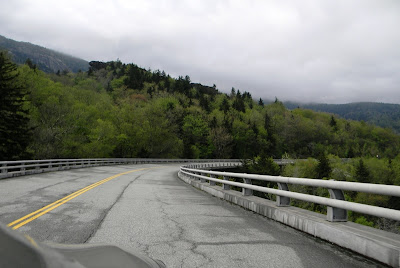 The view from the viaduct. 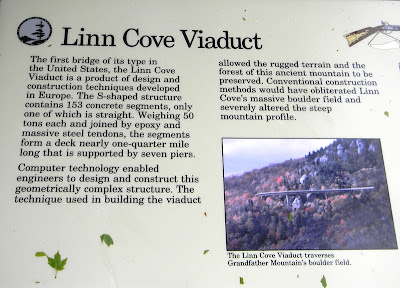 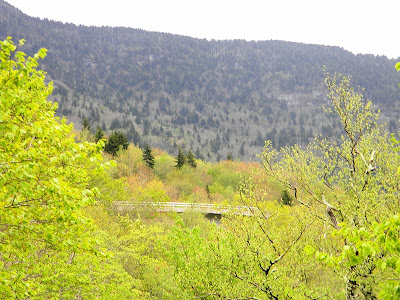 This view is of the viaduct from the Visitor Center at the south end. The trees show the stark difference of Grandfather's slopes at the alpine level. We saw this view at the beginning of the trail at the edge of the parking lot ... 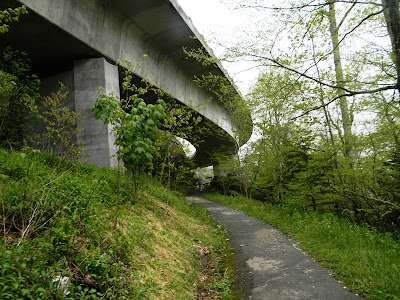 ... and then we saw this view as we approached the viaduct from the trail. Seeing it from beneath was an entirely different experience as we studied the pillars and molded cement sections that barely disturbed the surrounding area. 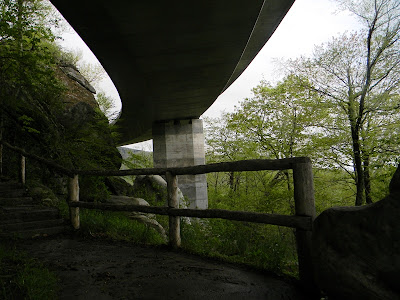 Not to mention it was a good leg-stretcher in-between thunderstorms on a rainy day.