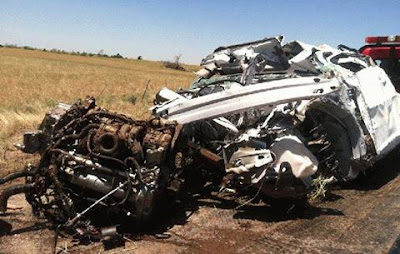 This is the vehicle that three storm chasers were in when they died during a tornado outbreak Friday night in Oklahoma. Photo courtesy of Ed Lavandera (CNN).

Tragically, it was learned on Sunday that three storm chasers were killed in Friday night's tornado outbreak in Oklahoma. One was well-known Tim Samaras, 55, of Colorado, who had been a part of the Discovery Channel's Storm Chasers for three seasons. With him were his 24-year-old son Paul, and 45-year-old friend Carl Young -- all killed chasing the tornado.


Tim Samaras founded TWISTEX, the Tactical Weather Instrumented Sampling in Tornadoes Experiment, to help learn more about tornadoes and increase lead time for warnings, according to the official website.

In 2004, he told CNN that being near storms was part of the job.

"In order to get directly in the path, you have to be close," he said.

"Actually I'm pretty focused on our safety, certainly, and I'm focused on getting the data and getting the right spot," he said. "You only have one chance to do it."

Described as a scientist and researcher, Samaras has long been a part of the weather scene collecting data for use to develop a better understanding of the destructive storms that plague the mid-west.

Weather Channel meteorologist Mike Bettes and two others were in a vehicle that was sucked up inside a tornado during Friday's outbreak and thrown through the air. All survived with minor injuries. 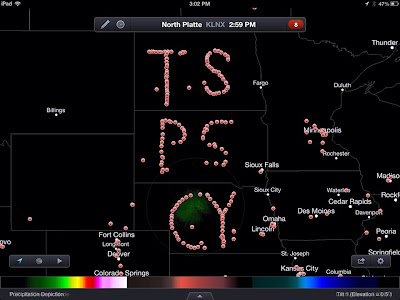 My meteorologist son-in-law passed along this graphic of the weather spotter/chaser network tribute to the three storm chasers. Each in the network drove to these locations so the map would spell the initials of the three men who died. Prayers to the families of all who lost their lives in this latest weather tragedy.
Posted by Lynn R. Mitchell at 6/02/2013 06:17:00 PM