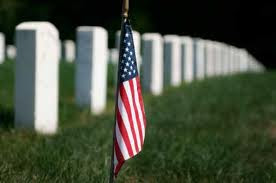 Today is D-Day. How many will continue to remember this major milestone battle of World War II that played such a big part in the freedom we enjoy? How many will keep the observance alive even as the Greatest Generation dies off and the memories fade?

One family's wordsmith kept the memory of sacrifice and loss alive after penning a Memorial Day column some years ago. Lee Wolverton, then publisher and editor of the Waynesboro News-Virginian, remembered his grandfather who had given the ultimate sacrifice on D-Day when he parachuted in over enemy territory. It is a remembrance that has become a NV tradition each Memorial Day, and it seemed particularly fitting today since the actual event took place on D-Day.


In the wee-hour darkness, the stocky young colonel stood on an earthen mound, gazing into the faces of the 750 warriors before him.

“Men,” he said, “I am not a religious man, and I don’t know your feelings in this matter, but I am going to ask you to pray with me for the success of the mission before us. And while we pray, let us get on our knees and not look down, but up with faces raised to the sky.”

In the orchard outside Exeter, England, rifles clanked against helmets as the soldiers descended to their knees in the dew-dampened grass. “God almighty, in a few short hours we will be in battle with the enemy. We do not join battle afraid. We do not ask favors or indulgence but ask that if you will, use us as your instrument for right and an aid in returning peace to the world.

“We do not know or seek what our fate will be. We ask only this, that if die we must, that we die as men would die, without complaining, without pleading, safe in the feeling that we have done our best for what we believed was right.

“Oh, Lord, protect our loved ones and be near us in the fire ahead and with us now as we each pray to you.”

The paratroopers then clambered aboard C-47 airplanes for the flight to their drop zone: Normandy, June 6, 1944.

For the colonel, it was the fulfillment of a dream born during his days as a boy picking apples in mountain orchards outside his native Elkins, W.Va. After graduation from West Point, with war looming, he was assigned a battalion in the elite 101st Airborne Division in preparation for the largest invasion in military history.

The moment for which he longed ended instantly. He was hit in the chest by a series of machine gun rounds as he descended from the heavens into a sea of German artillery fire. By the end of the fighting in Normandy, almost 100 of his men had joined him among the war dead.

Widely scattered but well-trained, the survivors soldiered on, seizing a pair of bridges over the Douve River and cutting off routes for German reinforcements at Utah Beach. The colonel’s troops later fought in Operation Market Garden in Holland and the pivotal Battle of the Bulge in Bastogne.

Memories of 3rd Battalion commander Lt. Col. Robert Lee Wolverton remained vivid more than six decades after the invasion. The colonel and those who perished with him in Normandy embodied not only the sacrifice we honor today, but also a uniquely American spirit that transcends eras and debates over the merits of war. It is a spirit that lives in those who have given all and those who risk it in Iraq and in Afghanistan. Pray it endures forever.

Nowhere did Normandy hit home more than in Bedford, Virginia, where the National D-Day Memorial is located as a reminder of a small town that sacrificed so much for America:


Like eleven other Virginia communities, Bedford provided a company of soldiers (Company A) to the 29th Infantry Division when the National Guard's 116th Infantry Regiment was activated on 3 February 1941.

Some thirty Bedford soldiers were still in that company on D-Day; several more from Bedford were in other D-Day companies, including one who, two years earlier, had been reassigned from the 116th Infantry to the First Infantry Division. Thus he had already landed in both Northern Africa and Sicily before coming ashore on D-Day at Omaha Beach with the Big Red One.

Company A of the 116th Infantry assaulted Omaha Beach as part of the First Division's Task Force O. By day's end, nineteen of the company's Bedford soldiers were dead. Two more Bedford soldiers died later in the Normandy campaign, as did yet another two assigned to other 116th Infantry companies. Bedford's population in 1944 was about 3,200.

Proportionally this community suffered the nation's severest D-Day losses. Recognizing Bedford as emblematic of all communities, large and small, whose citizen-soldiers served on D-Day, Congress warranted the establishment of the National D-Day Memorial here.

Sadly, Bob Slaughter, 87, a D-Day veteran and one of the driving forces behind the National D-Day Memorial in Bedford, passed away in 2012 in Roanoke.  The Roanoke Times wrote:


On D-Day, the June 6, 1944, invasion of Nazi-controlled Normandy, John Robert “Bob” Slaughter of Roanoke waded ashore toward the death and chaos of Omaha Beach as a sergeant and squad leader in Company D, 116th Infantry, 29th Division. He was 19 years old. At 6-feet, 5-inches tall he presented a large target.

The memories of that history-changing day during World War II and of the months of fierce combat that followed in France and Germany compelled Slaughter decades later to fight for and help win a memorial for the D-Day veterans who turned the tide of war against Germany.

It was said after D-Day that we would never forget. Will future generations remember that promise?
Posted by Lynn R. Mitchell at 6/06/2013 07:22:00 AM