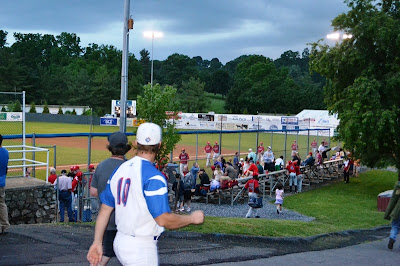 The first incident happened last week while out for lunch with a friend at Logan's Roadhouse in Waynesboro. A couple at the next table offered a newspaper coupon to help offset our meal, saying they already had one and it would expire in a couple of days so they wanted someone to be able to use it. We gratefully accepted -- every little bit helps -- and thanked them for their kindness.

The second incident was at Monday's Staunton Braves baseball game. As my husband, sister, niece, and I approached the ticket gate, a couple getting ready to enter the game asked if we had tickets. No, we said ... we were about to buy them. The lady handed us four tickets -- rain checks from an earlier game that would expire that night. We thanked her and she thanked us, saying she was glad they could be used. It was especially appreciated when a lightning storm rolled in 20 minutes later and stopped the game, cutting short our game night out.

Random acts of kindness. They happen every day....