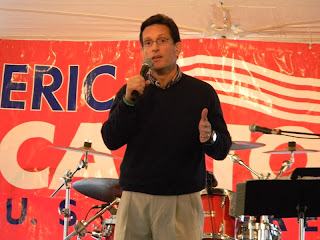 Eric Cantor addresses the crowd at his annual Republican Roundup.

In an effort to make it easier for Americans to be more involved in the legislative process, House Majority Leader Eric Cantor (R-7th) launched a new website on Tuesday called cosponsor.gov.

This latest addition to the Citizen Cosponsor Project provides the opportunity to be citizen legislators by cosponsoring bills they support and track them in a user-friendly way, lessening the bureaucratic maze of Washington, D.C. By using social media, Citizen Cosponsors are updated on the status of their bills through a Facebook app as they move through the various stages of the legislative process.


Noticed the trend of legislators going beyond issuing press releases and fully embracing social media to distribute and market their point-of-view?

Rep. Darrell Issa has been especially active in marketing himself and his committee’s activities, including design-heavy graphics and an active twitter account.

Today Rep. Eric Cantor’s office launched a new website, Cosponsor.gov, which allows anyone to show their support for bills by clicking a link to “cosponsor” a given bill.

Marking the launch of the new site, Congressman Cantor noted:


“We live in a digital world. As House Majority Leader, I am committed to exploring new and innovative ways to foster a national conversation and improve communication between the American people and their elected officials.

“The launch of Cosponsor.Gov is a sweeping expansion of our Citizen Cosponsor Project. The new website will now feature every bill and resolution introduced in the House, from Republicans and Democrats. I’m excited that any engaged citizen can voice their support, and track the status of legislation in the House.

“The best part of this new website is it’s accessibility and simplicity. You can search by title, sponsor or bill number or browse issue areas and the tracker shows you exactly where the bill stands.

“Whether you want to support new legislation like the Kids First Research Act or show support for legislation that has already passed the House, like the Working Families Flexibility Act, you can do so here.

“Transparency, open government and engagement should be a key goal of all elected leaders in Washington, and Cosponsor.Gov is one step in that direction. Please visit Cosponsor.Gov and tell us what you care about. We are listening.”

The Citizen Cosponsor Project was developed by the Office of the House Majority Leader and is built on Facebook's Open Graph platform. It uses House #OpenData sets released through the House Majority's #OpenGov initiative.
Posted by Lynn R. Mitchell at 6/05/2013 08:10:00 AM