Frontier Museum Homeschool Day ... and then the rains came & I ducked under a tree 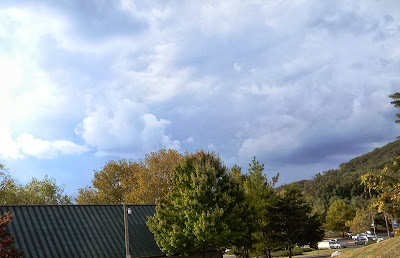 As dark clouds gathered in the western sky Friday afternoon, hundreds of homeschoolers were at the Frontier Culture Museum enjoying the exhibits. With camera in hand, I was everywhere taking pictures and even shot one of the storm clouds visible above Staunton's Betsy Bell and Mary Gray mountains.

When the first misty raindrops began, they were scattered and could barely be felt. I paid no attention to the moisture in the air ... it's a passing cloud, I thought ... and continued on my way, stopping in at the Irish farm, Irish forge, around by the pond, and by the cow. I visited with Sally Landes and the rest of the English farm interpreters and, after leaving there, stopped to visit with the goats who thought I had food and stuck their little heads through the fence to get closer. Cute goats.

As I stood watching them -- okay, I was talking to them -- some larger raindrops began as the wind picked up. My first thought was that the cooling wind felt good because it had been a warm day in the mid-80s.

That's when I realized there were some even larger raindrops mixed in the wind. Hmm ... maybe I should head toward shelter, I thought, and picked up the pace heading toward the entrance. 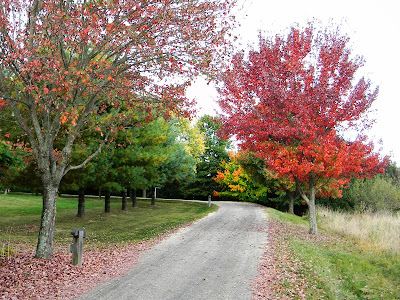 I finally stepped under the trees in the shelter of the just-photographed leaves. Ahhh ... perfect, I thought ... I'll just weather this little shower from under here. As homeschoolers dashed up the path to the main building, I watched from my dry spot and enjoyed the view peeking out from under the leaves while breathing in the fresh air and the smell of the rain and ... 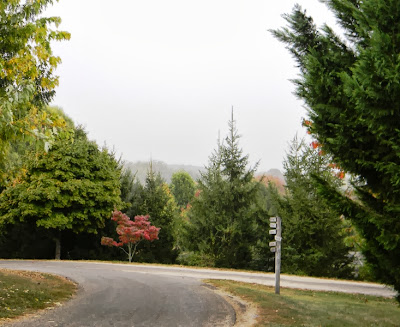 Watching the rain from under a tree.

BOOM. The sky opened in a downpour, rain obscuring the distant mountains and finding its way through the tree leaves.

I watched the pouring-down streaks of rain for a minute, hoping it would quickly let up because surely that much rain cannot come out of the sky for long -- right? -- and then realized I was getting wet. Forget the leaves ... rain was pouring onto me.

That's when I made my escape for the main building. By the time I scooted under shelter, my naturally curly hair (I always hear the voice of that little Peanuts character when I say that) -- previously nicely straightened, thanks to the hot iron -- was sufficiently soaked that curls began boinging out like springs.

And that was the end of my afternoon at the Frontier Museum. I left with damp clothes and frizzy hair.