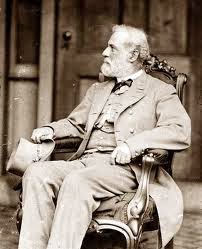 "It is well that war is so terrible, or we should grow too fond of it."
-- General Robert E. Lee

On this day in 1870, General Robert E. Lee died at the age of 67 after suffering a stroke while serving as president of Washington College (now Washington and Lee University) in Lexington, Virginia. He is buried at the chapel at Washington and Lee, with his trusty horse Traveller buried nearby.

Lee is perhaps best remembered as a Virginian who would not fight against his native state and turned down President Abraham Lincoln's offer to command the Union Army. When Virginia voted to secede from the nation in 1861, Lee had serious misgivings about secession but could not fight against the south so agreed to lead the Confederate Army.


Today, [Lee] remains internationally respected as a daring, often brilliant tactician, a gentleman who never referred to Northern soldiers as "the enemy" but as "those people over there," a man who opposed secession but felt honor-bound to serve his native state. He applied for restoration of his American citizenship, but the papers were lost until the 1970s, when his wish was granted.