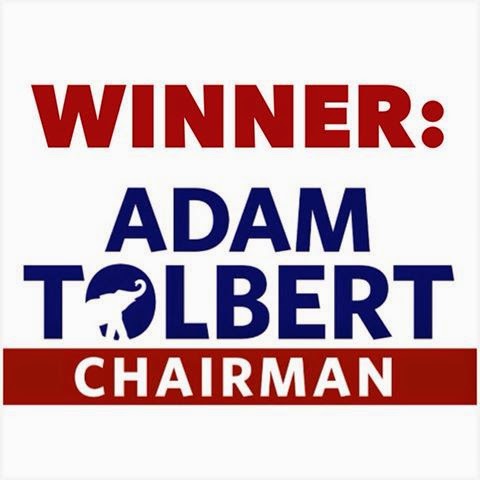 Adam, 29, won by a vote of 801-291 over Charlie Hargis who was endorsed by E.W. Jackson.
Did I really hear that Russ Moulton was once again on the premises and trying to make changes during the convention? With all the smack talk from the Moulton side of the aisle about others, it's interesting how they are surprisingly quiet about Moulton's part in conventions and mass meetings all over the state far from his home base.

But Adam prevailed -- soundly -- making him one of RPV's youngest district chairs. He already has years of volunteer work behind him. The chairman of Smyth County's Republican Committee for the past several years, Adam has also been a member of the State Central Committee for several years, not surprising for someone who started volunteering on political campaigns at the age of 10.

A lifelong resident of Smyth County, he graduated in 2006 from The University of Virginia’s College at Wise in Wise, Virginia, with a B.A. in Political Science, and in 2008 earned a Master of Science in Management degree from Liberty University. He also completed the 2008 Candidate Training Program (CTP) of the Sorensen Institute for Political Leadership, and currently works at the Wise campus of UVa.

On top of that, Adam spent a number of years blogging about politics as the Smyth County Conservative which is how I first met him -- a fellow blogger as well as a fellow State Central member. His blog provided information about upcoming races and candidates but on August 29, 2011, he announced his own plans to run for political office with a blog post noting his run as Treasurer. Though his opponent won at that contest, Adam continues with his grassroots leadership in a humble but determined way.

I've congratulated Adam on Facebook but wanted to congratulate him again for a fair race and solid win. He has a bright future in Virginia Republican politics.
Posted by Lynn R. Mitchell at 4/12/2014 03:12:00 PM