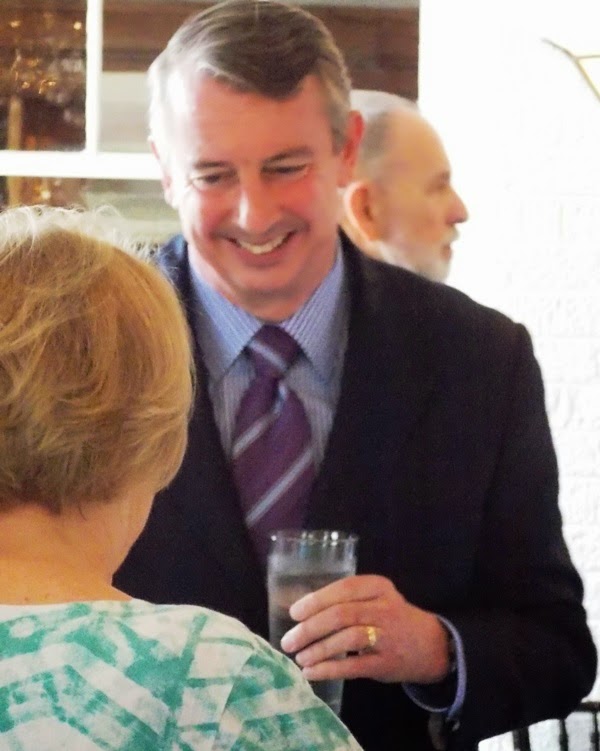 Ed Gillespie last week on the campaign trail in Roanoke.

In the latest poll, this one from PPP/MoveOn.org, there is more good news for Republican Ed Gillespie as Virginia Democratic U.S. Senator Mark Warner once again polls below 50 percent.

Political strategist Glen Bolger commented that "while we do not typically highlight PPP polls, these results are noteworthy for what they say about Mark Warner’s rapidly eroding standing with the Virginia electorate."

A March 27 Quinnipiac Poll came up with similar results and noted that the political atmosphere in Virginia is toxic this year for Democrats. Mark Warner's Achilles heel has been, and continues, to be his vote and support for Obamacare.

Bolger pointed out the following from the Public Policy Poll which traditionally leans Democratic:


Mark Warner continues to operate in the danger zone for a well-known incumbent by failing to capture 50% on the ballot. He is additionally underperforming among several key groups. Warner trails among Independents (39%-41%), 30-45 year olds (35%-48%), and even among Hispanics (34%-39%). Twenty percent (20%) of Independents are undecided, and historically, Independents tend to break for the challenger.


The political environment continues to look bleak for Senator Mark Warner. He is struggling on the ballot among several key midterm groups versus a challenger who is not yet well-known. The Democrats have also overestimated their hand on Medicaid expansion. Not only do the numbers prove less than inspiring for Democrats in Richmond, they are hampering Mark Warner's re-election as well.


Senator Mark Warner faces a tough political environment in his fight for a second term. Frustration with the president and his administration are significant factors in Warner’s underwhelming showing on the ballot test, as is Warner’s support for Obamacare, which a majority of Virginia voters oppose. In an already-difficult year for Democrats due to those factors and more, Warner’s 46% on the ballot is a dangerous baseline heading into the November election.

Gillespie continues to crisscross Virginia on his campaign to become the Republican nominee, stopping last week in Roanoke before continuing on to Virginia Beach and the Republican Women's convention. It is generally expected that he will win at the upcoming GOP state convention although last year's free-for-all convention proved anything can and will happen in these closed events. Considered by UVa's Dr. Larry Sabato as a long shot for beating Warner, the polling numbers show that Warner is vulnerable, something Republicans plan to take advantage of in their question to chip away at Democratic office holders.