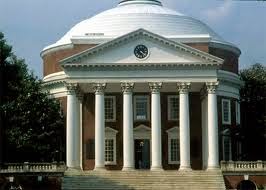 "This institution of my native state, the hobby of my old age, will be based on the illimitable freedom of the human mind, to explore and to expose every subject susceptible of it's contemplation."
--Thomas Jefferson, December 26, 1820

It's official! Mr. Jefferson's Class of 2018 will include SWAC Niece who has decided to attend the University of Virginia to pursue her higher education.

The decision was made after mulling two choices after her acceptance also at Virginia Tech. The difficulty was deciding between those two fine Virginia schools while weighing her decision on solid educational choices which included curriculum offered, the best courses for her chosen areas of interest, and other criteria that were important to her.

She had visited both schools in the fall of 2013 so after acceptance letters were received, she revisited them in April while working her way to the final decision. There was much to love about both universities, and she noted that she could picture herself at either one.

In the end, Thomas Jefferson's UVa -- steeped in Virginia history and architectural beauty -- offered more of what she was looking for over the next four years. Her announcement on Facebook ended with, "UVa felt like home and I'm really excited to announce that next year I will be a Hoo!"

Her parents raised a conscientious and thoughtful young lady, instilling the tools she will find helpful as she leaves the nest. We're all excited and happy for this youngest of the cousins as she heads out on her own, and we look forward to what the next chapter in her life's journey will offer as she heads to Charlottesville in the fall. Oh, the places she will go!

---
A brief history of the founding of the University of Virginia (from the UVa website):


Thomas Jefferson founded the University of Virginia in 1819. He wished the publicly-supported school to have a national character and stature. Jefferson envisioned a new kind of university, one dedicated to educating leaders in practical affairs and public service rather than for professions in the classroom and pulpit exclusively. It was the first nonsectarian university in the United States and the first to use the elective course system.

Jefferson considered the founding of the University to be one of his greatest achievements. Undertaking the project toward the end of his life—after a long, illustrious career that included serving as a colonial revolutionary, political leader, writer, architect, inventor, and horticulturalist—he was closely involved in the University's design. He planned the curriculum, recruited the first faculty, and designed the Academical Village, a terraced green space surrounded by residential and academic buildings, gardens, and the majestic center-point—the Rotunda. The most recognizable symbol of the University, the Rotunda stands at the north end of the Lawn and is half the height and width of the Pantheon in Rome, which was the primary inspiration for the building. The Lawn and the Rotunda have served as models for similar designs of "centralized green areas" at universities across the United States.

The University opened for classes in 1825 with a faculty of eight and a student body numbering sixty-eight. Jefferson took great pains to recruit the most highly qualified faculty, five of whom were found in England and three in the United States. Instruction was offered in ancient languages, modern languages, mathematics, moral philosophy, natural philosophy, chemistry, law, and medicine. The students came from the American South and West; interestingly, though, most were not Virginians.

Jefferson opposed the granting of degrees on the grounds that they were "artificial embellishments." In 1824, however, the Board of Visitors authorized granting the master of arts degree. The doctor of medicine, or M.D., was awarded to the first graduates of the School of Medicine in 1828, and the bachelor of laws degree, or LL.B., was first awarded for law school graduates in 1842. The bachelor's degree was awarded beginning in 1849, but became the standard undergraduate degree and a prerequisite for the master's degree in 1899, bringing the University into conformity with other institutions of higher learning. The Ph.D. has been awarded since 1883.