Wreaths at Arlington Cemetery to honor and remember.... 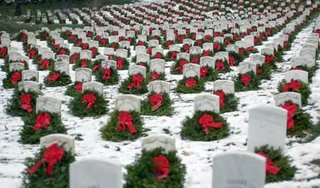 Arlington National Cemetery
"Remember the fallen ... honor those who serve.
Teach our children the value of freedom."
It's happened again....

For the sixteenth year in a row, Worcester Wreath Company out of Maine donated thousands of wreaths for Arlington Cemetery where over 500 volunteers helped place them on head stones today.

Karen and Worrill Worcester, owners of the wreath company that supplies all evergreen products for L.L. Bean, never sought notoriety but word through the blogging community, and circulation of the above photo around the internet, got the word out. They consider it their way of showing honor for our fallen heroes.

The Wreaths Across America story began 16 years ago when Worcester Wreath Company (a for-profit commercial business from Harrington, Maine) began a tradition of placing wreaths on the headstones of our Nation's fallen heroes at Arlington National Cemetery.

Over that period of time, Worcester Wreath has donated 75,000 wreaths which were placed by volunteers in a wreath-laying ceremony each December. This year, Worcester Wreath Company will do even more to show its respect and appreciation for those who serve, by doing the following:

* In addition to the Arlington Wreath Project, Worcester Wreath donated 2,500 wreaths to the Maine Veterans Cemetery at Togus, and over 1,800 ceremonial wreaths, representing all branches of the armed forces, will be sent to over 200 other state and national veterans cemeteries across the Country.

* For the first time in 2007, ceremonial wreaths will also be donated to 24 veterans cemeteries on foreign soil, and aboard U.S. ships sailing in all seven seas.

Email ThisBlogThis!Share to TwitterShare to FacebookShare to Pinterest
Labels: wreaths at Arlington Cemetery