Porkulus Democrats: "Do as we say, not as we do" 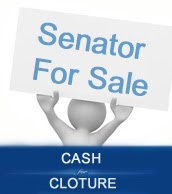 The pork is flowing into Democrat coffers at the expense of hard-working Americans. And who is profiting? Michelle Malkin reports:

According to a new study by the Mercatus Center at George Mason University, Democratic districts have raked in nearly twice as much porkulus money as GOP districts -- without regard to the actual economic suffering and job loss in those districts. In fact, the researchers found that far more stimulus money went to higher-income areas than to lower-income areas.

That includes Democratic House Speaker Nancy Pelosi's backyard -- where a $54 million no-bid contract was awarded to a firm with little experience to relocate a luxury Bay Area wine train due to flood concerns.

And it includes Senate Majority Leader Harry Reid's backyard -- where he secured billions in high-speed rail stimulus earmarks from which he plans to fund a pie-in-the-sky public transportation line from Los Angeles to Las Vegas.

Thankfully, many Americans are waking up to what is going on in Washington. Thanks to Ms. Malkin and others who are keeping an eye on these shananigans even as the nation pauses to celebrate the birth of Christ.
Posted by Lynn R. Mitchell at 12/24/2009 01:33:00 PM