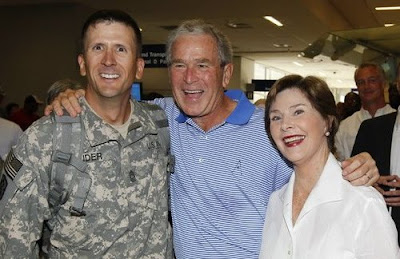 George and Laura Bush greet soldiers returning from Iraq and Afghanistan at Dallas-Fort Worth Airport in Texas on August 11, 2010.

It was a welcome that many troops won't forget as they returned home from duty in Iraq and Afghanistan. As they entered the terminal at the Dallas-Fort Worth airport terminal on August 11, not only were their loved ones waiting to greet them but also former President George W. Bush and former First Lady Laura Bush, both Texas natives.

The "Welcome Home" project has been a long-standing effort by those in the Dallas-Fort Worth area and coordinated by a man named Bert Brady. About 40 people, among them retirees and veterans, show up daily to welcome home soldiers at the airport as they return to the U.S. from service overseas. Soldiers have asked to be rerouted so they can return home through Dallas-Fort worth.

Here is video of President and Mrs. Bush interacting and welcoming American troops back home to America on August 11, 2010.

The American Family Association wants to send thanks to President Bush for his continued patriotism and leadership, writing:

Please help us send 100,000 "Thank You!" messages to former President George Bush for his patriotism and support of our military! Let's let him know we are grateful for his continued leadership. Please continue to remember our troops and their families in your daily prayers. Watch the video and send your "Thank you!"

To some extent, I suppose I will always be furious with George W. Bush. I detested his stances on the Bailout Bill, "Immigration Reform," and government spending. Just the same, that man has class, and he got a lot of other things right.