Thoughts on a late summer afternoon.... 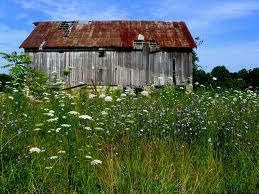 It's late summer ... the sun is dipping lower in the sky ... temperatures are moderating a little cooler after the 100+ degree days of July and August ... the humidity is lower as a feeling of fall is in the air. Some rogue leaves have already changed colors early ahead of the autumn palate that will soon arrive on the mountain slopes.

The vegetable garden is beginning to play out. We're still getting tomatoes and peppers but the corn, squash, potatoes, and onions have finished. The sunflowers are beautiful as they regally stand guard over the rows of what's left to harvest, honey bees busily working on the bright yellow heads.

Potted flowers are beginning to have that late-summer bedraggled look about them, scraggly and leggy, and the mauve, purple, pink, and white petunias in the window boxes will soon be replaced by chrysanthemums in fall colors. It's a yearly ritual ... and so the cycle continues.

Queen Anne's Lace, chickory, and other wild flowers continue to bloom as farmers get in the late summer hay crop. It's time for apples and pumpkins and corn stalks ... school is back in and field trips will be starting up again soon. Festivals and craft shows will be going on the next two months ... Halloween and Thanksgiving are right around the corner to be followed by Christmas.

I must admit I'm a fall person ... I like cooler temperatures, the crisp mountain air that puts a pep in the step ... and I like pulling out snuggly sweaters and cozying up to the wood stove and heading to the mountain ridges to watch the changing of the seasons. Finding time to slow down and take in God's beauty is more important as the days pass ... living in the shadow of the Blue Ridge Mountains and Appalachians makes it possible to escape to the higher elevations whenever possible.

It's late summer in the Shenandoah Valley and fall is in the air....

What a great article. I've sensed that autumn feeling, too. Michael said to me when he was here on Sat. to not ever take four seasons for granted. He misses them living in Houston. Even in Dallas, there are the 4 seasons, but not like here.