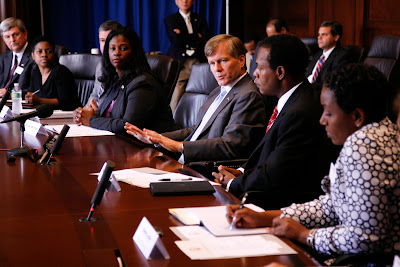 Governor Bob McDonnell discusses his goals for the Supplier Diversity Advisory Board at the inaugural meeting held today, Tuesday, August 17th, in Richmond. Members of the board were announced yesterday in a press release, which can be found here.
Posted by Lynn R. Mitchell at 8/17/2010 03:45:00 PM

Isn't a "Supplier Diversity Advisory Board" antiethical to what we believe as conservatives? While the governor can claim that this provides equal opportunity for all, what it really means is quotas and/or lowered standards. Shouldn't we, the taxpayers, do business with those who provide the best price/service, whether or not they are a minority of some type?