Augusta Board of Supervisors meeting ... fire and rescue issues cause concern

Dr. Kurt Michael, president of the Emerald Hills Homeowners Association in Fishersville, addressed the Board of Supervisors at Wednesday night's meeting to see what progress had been made at Yancey Fire Department after it received the lowest ISO ranking earlier this year. From the Waynesboro News Virginian:

"Kurt Michael, president of the Emerald Hills Homeowners Association, said residents have been waiting for a final agreement on the 24-7 ambulance staffing at the beleaguered department.

"[BOS Chairman Gerald] Garber told Michael he was waiting for the final agreement between the ambulance providers and Yancey, which will trigger full-time ambulance service at Yancey.

" 'I am increasingly annoyed,' said Garber, who told Michael that he and other Fishersville residents have been patient about Yancey's problems." 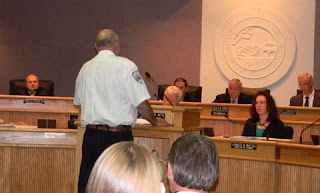 Chief Doug Morris of the Deerfield Fire Department asked the BOS to consider funding full-time staff during the day to cover fire and emergency calls. Located in the Pastures District of Augusta County, he was backed by Pastures Supervisor Tracy Pyles who offered to provide $87,000 from his infrastructure account to pay for full-time emergency personnel for six month. The motion was tabled for two weeks. Chief Morris was accompanied to the meeting by about 20 supporters and volunteers from the Deerfield area.