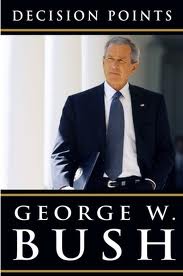 
George W. Bush is sitting on a hotel sofa in front of a south-facing window on a sunny November morning. His presidential memoir “Decision Points” is No. 1 on Amazon.com and is expected to be No. 1 on the New York Times best-seller list. “I’ve got a very comfortable life,” he says.

A discussion then followed as the former president talked about decisions made during his war-time presidency. At this point in the book tour, it's difficult to follow so many other interviews but this is a good read at the WaEx.
Posted by Lynn R. Mitchell at 11/14/2010 09:40:00 AM