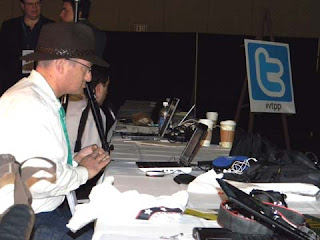 Smitty of The Other McCain blogging at the Virginia tea party convention.
October 2010.
The Pied Piper of the Fedorables is heading to war.

What? You didn't know one of the most-read bloggers in the U.S. was a Navy reservist preparing to ship out? Don't feel badly ... neither did I until VaRight blogger Tom White confided that information a while back, and then Smitty himself talked about it when we met at the tea party convention in Richmond in October.

Smitty was firm, however, that he didn't want any of us blogging about it before the elections because he didn't want to draw any attention away from the immediate task at hand: send Democrats packing with pink slips in hand as Americans toiled to begin a correction to our political course on November 2.

Smitty was all over the place those last weeks leading up to the election, covering races up and down the east coast and writing about them on The Other McCain. He certainly did his part for democracy at home ... and now he's going to do his part on the front lines.

Or, as he says, from the office ... but no matter how much he downplays his role in freedom, it is still a sacrifice to leave home for a year and live halfway around the world in a war zone. Think of twelve months with no blogging ... why, that alone is a supreme sacrifice for a keyboard jockey like Smitty!

Smitty's last post was Veteran's Day, and in it he wrote:


If I’ve done you any favors, I’d ask that you make this the single most linked post in this blog’s history. I do have one other project that I want to get out, and something for Pearl Harbor day, but the regular features I’ve been doing are in a hangfire for the nonce.

Meeting this prolific keyboard jockey was a pleasure and becoming a part of his merry band of fedorables was fun.

His last post closed with a somber reminder that war is war:


Yes, there is a ‘Dread Post’ positioned in Draft, backdated to November 2009. Pray that Stacy lacks occasion to publish it.

No problem on that prayer request. 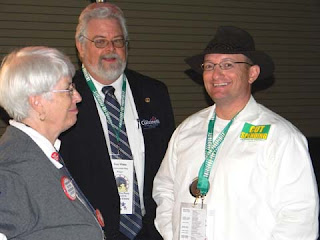 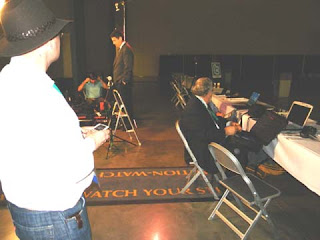