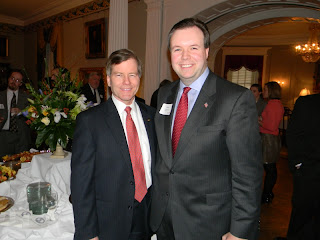 Gov. Bob McDonnell and Brian Schoeneman in the Executive Mansion during Bloggers Day
in February in a photo taken by me.
In February 2011 during Lt. Governor Bill Bolling's Bloggers Day at the Capitol, a tall young man took his place at the long table in the Governor's conference room with about two dozen conservative bloggers from around the Commonwealth. Included in the group were those from Virginia's Bearing Drift blog where he is one of the contributors.

Thoughtful in his responses but not shy in sharing opinions in the blogosphere, it wouldn't be long before this 34-year-old Fairfax Republican made a decision to cross the bridge from blogger to candidate.

Active in the Republican Party, Brian Schoeneman caught the political bug 16 years ago when he interned for a Pennsylvania state legislator. He later served in the George W. Bush administration as special assistant and senior speechwriter to Secretary of Labor Elaine L. Chao before entering the private sector as legislative and political director for the Seafarers International Union of North America.

Brian is married to KayAnn Panagi Schoeneman and together they have a young son. For a heart-warming read, check out this 2009 Washington Post article about how KayAnn and Brian met in college and eventually reconnected years later to become a couple.

This Saturday, June 3, is the Brian Schoeneman Campaign Kickoff for the 37th District Virginia House of Delegates seat. Everyone is invited to join him at the Old Firestation #3 formerly known as the Firehouse Grill in Fairfax from 3-5:30 p.m.