Monday in the Valley 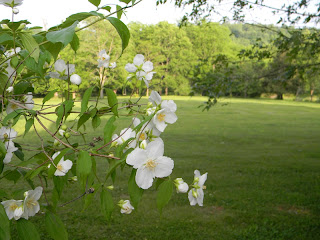 
One of the great things about working from home ... sitting on the back deck in the shade with my laptop enjoying morning in the Shenandoah Valley....

And it's true. As a nice breeze blows, the song birds are singing, the crickets are chirping, a crow is making a racket in the woods ... and I can hear the far-off drone of a neighbor's lawnmower. It's such a beautiful part of the world and the fact that I'm able to sit here at the table with my laptop and work is something to be grateful for.

D-Day.... It's a day that, hopefully, Americans will never forget in the battle for freedom. Virginians had a huge stake in D-Day with the sacrifice of the "Bedford Boys" which is why the national D-Day memorial is located in the Commonwealth. Thank a vet ... freedom is not free.

Stonewall Brigade Band.... Don't forget the summer series begins tonight for the Stonewall Brigade Band's press concerts at the Gypsy Hill Park Gazebo in Staunton. A tradition for over a 100 years, come join your neighbors at 8:00 for music under the stars. More details here.

Shakin' At The Station 2011 series continues its weekly Thursday night concerts at the Wharf in beautiful historic downtown Staunton. The complete summer schedule is here.

Sarah Palin and Paul Revere.... The left was so quick to jump on Sarah Palin's case, accusing her of being wrong in her historical facts about Paul Revere, but it appears that she may have been correct. Today has all kinds of news coming out about that. Love her or hate her, the woman is not the devil reincarnated as some would have you believe. Check it out: Townhall, LA Times, and the Boston Herald.

Augusta County public schools will have their last day tomorrow (Tuesday). You know there are some excited kids in classes today....