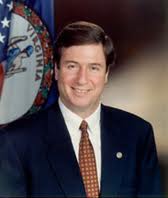 My blogging colleague Jim Hoeft at Bearing Drift posted about the fact that George Allen, one of Virginia's U.S. Senate candidates, now has not one, not two, but three trackers, courtesy of the Democrats and like-minded groups.

Three video cameras, mind you, to try and catch him in any trip-up or slip-of-the-tongue during the numerous campaign stops, talks, speeches, meet-and-greets, and endorsements he is engaged in for the campaign. Election day for him is still a year-and-a-half away.

In the comments section is the usual array of naysayers. Any leader worth his salt has them, and walking through the mine field makes him a stronger and better candidate.

Vitriolic responses have become common in this day and age of anonymous commenters, those faceless individuals who lurk in the blogosphere as trolls for their chosen targets. Though the blogosphere has changed and in some ways grown up in the past 10 years, some didn't grow up with it.

George Allen, George W. Bush, Bob McDonnell, Ken Cuccinelli ... they are all targets for the darts and arrows along with the slanderous lies and rumors. Wouldn't it be nice if those anonymous commenters came out from the shadows and faced their targets head-on? Would they?

I'm betting no because their game is a coward's game and a reminder of this Theodore Roosevelt saying:


"The credit belongs to the man in the arena, whose face is marred by dust and sweat and blood ... who if he fails, at least fails while daring greatly, so that his place shall never be with those cold and timid souls who know neither victory nor defeat."

Cowards don't put their necks on the line because they are afraid of failure. Meanwhile, leaders continue on. If George Allen had not stepped back into the arena, he could have safely remained on the sidelines ...