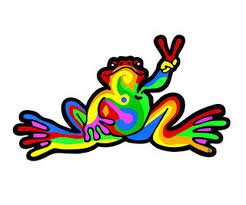 Catesby Jones, 46, president of Peace Frogs, Inc., has announced that he will be a candidate for the Republican nomination to run for the Virginia House of Delegates 98th District seat held by retiring Harvey Morgan since 1980.

He joins three other Republican candidates, Sherwood Bowditch, Ken Gibson, and Keith Hodges, who are also running for the nomination.

Jones, who founded the multimillion dollar international Peace Frogs company in 1985 while a student at the Univeristy of Virginia, ran for the First Congressional District congressional seat in 2007 after the death of Congresswoman Jo Anne Davis in a crowded field that saw Rob Wittman take over that seat.

Peace Frogs is headquartered in Gloucester where Jones' father served as Commonwealth's Attorney for 16 years and his grandfather was a judge for 25 years.

Jones, who graduated from UVa in 1987 with a B.S. in International Relations and a minor in Economics and History, is an active member of the community where he organized the Peace Frogs Bank to Bank Fund for needy children in the Tidewater area, a two-mile swim across rivers in the Middle Peninsula region.