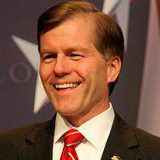 With the latest polling numbers confirming that Virginia Governor Bob McDonnell continues to be one of the most popular governors in the country, some are beginning to look ahead to 2016's presidential race.

A "Draft Bob McDonnell for President 2016" Facebook page has been set up as a grassroots effort to gain support for this effort:


President of the United States. The face of a nation ... OUR nation. Someone who is like us, understands us, can talk to us and about us; yet has a clear vision of the future of our country and the gifts to make it a reality.

Governor McDonnell is this man. A proven man of the people, his entire adult life has been in public service both in and out of a uniform. He is a devoted husband, doting father, former Soldier, previous Attorney General, and now Governor of the great state of Virginia. He has lived a life whose sum of experiences have prepared him for this responsibility.

He knows how to envision the possibilities, develop the strategy to achieve them, use his gifted ability to lead others toward the same goals, and make the tough decisions necessary to keep the vision alive. His record in prior positions and now as Governor is an undeniable testament to his fiscal responsibility.

His love for country is best seen in his deep respect for the Military and their service/sacrifice. He understands responsibility and will never shy from it. He does not blame others, but rather takes on these challenges as his own. He is not a man of apologies but a man of integrity.

President McDonnell will lead this country along a difficult but rewarding road to economic recovery, international respect, and opportunities for all at home who work hard and devote themselves to achievement - regardless of social status or ethnicity.

Bob McDonnell ... the 45th President of the United States.