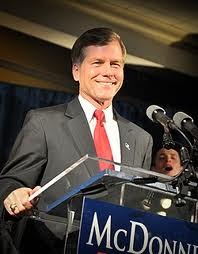 After Republicans lost the presidency this year, some saw only a bleak future. Columnist Bob Raynor, however, sees the silver lining in that loss, writing in Sunday's Richmond Times-Dispatch:


* Capturing 48 percent of the vote against an incumbent with a $1 billion war chest and a deeply loyal base is no reason to panic, even if you did lose to a guy presiding over an economic recovery that's weaker than a turkey's knees the day before Thanksgiving.

* You'd best ignore advice from the media - except from me, of course - which may not always have Republicans' best interests at heart. The kernel of most proffered punditry seems to be, "Abandon your principles and be more like Democrats!!!"

* Pay attention to Richmond. It's a more sensible place than Washington, even if our baseball stadium's not quite as nice, and the guy in the Executive Mansion here is more adept at pushing progress without calling people names and making everyone mad at everyone else.

He is very complimentary of Virginia Governor Bob McDonnell, a sometimes-overlooked leader who possesses charisma, leadership abilities, and military-induced discipline, and enjoys one of the highest approval ratings of any governor in the country.

After noting many of the Governor's achievements, Raynor writes:


McDonnell has compiled a record that other Republicans should emulate. He has focused on practical solutions, spending restraint, low taxes and economic progress, as he promised to do in his 2009 campaign.

I hope the naysayers are reading this, those who insist on attaching made-up grievances on this principled man. Raynor writes:


His style relies on reasoned arguments delivered in civil tones. Occasionally, fellow Republicans have been heard to grumble that he's too nice. Yet it's hard to recall an occasion when McDonnell has backed away from his core conservative philosophy. Instead, he seeks original compromise.

This combination of principle and pragmatism extends most skillfully to the governor's handling of social issues, where he might best be described as gently unwavering.

Raynor gently chides Republicans who may have taken the recent loses too seriously, concluding:


A recent survey from Quinnipiac, the little university in Connecticut best known for its many political polls, found that Virginians approve of the job McDonnell's doing by a 2-to-1 margin - and he's even stronger among independents. He outperforms your typical Republican in many of the groups that helped re-elect President Obama this month.

"As Gov. Bob McDonnell enters his final year in office, he remains one of the nation's more popular chief state executives," said Peter A. Brown, assistant director of the Quinnipiac University Polling Institute.

"He is the only Republican officeholder in the seven states surveyed by Quinnipiac University who gets positive ratings from women, almost 2-1 in this case, and a plus score from black voters. A 2-1 approval rating among young voters doesn't hurt. Are national GOP leaders paying attention here?"