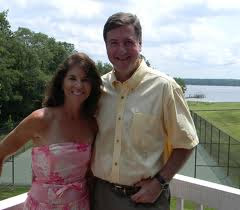 Susan and George Allen at their home, summer 2011.

Waynesboro reporter Bob Stuart sat down Monday with Republican George Allen for Allen's first post-election interview less than a week after his loss to Democrat Tim Kaine. In the most-watched and most expensive U.S. Senate race in the nation, it went down to the wire before both Allen and Republican presidential candidate Mitt Romney fell to defeat.

Stuart, with the Waynesboro News-Virginian, beat out the Washington Post and others for the coveted interview to ask the former Governor and U.S. Senator, "What now?"

After a hard-fought race, Allen spoke candidly about his experience during the 45-minute interview in which Stuart wrote:


Of the nearly two-year campaign, Allen said, "We gave it our all." He said he and his wife worked harder during the campaign than in any other they had ever waged for political office.

Stuart traveled to Alexandria to sit down and talk with Allen in his Northern Virginia office. This is the first of a two-part article with the second part delving deeper into Allen's thoughts about the 2012 campaign and his future.