2014 State of the Commonwealth address by Gov. Bob McDonnell 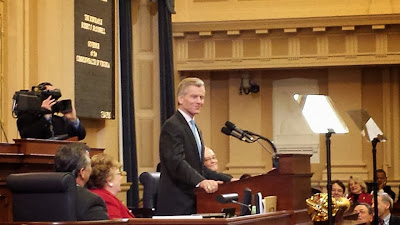 State of the Commonwealth Address

Justices of the Supreme Court and Judges of the State Corporation Commission,

Ladies and Gentlemen of the General Assembly, now in your 395th year,

It is my privilege to address you, one last time, as Governor, on the State of the Commonwealth.

I must note that because it's my last speech the Speaker promised me all the time I wanted… so get comfortable.

For 22 years I have served with you. First, in this chamber as a Delegate. Then as Attorney general. Now, as Governor.

While this public chapter of my life draws to a close, I'm not the only one saying farewell.

Tonight, a grateful Commonwealth salutes the public service of:

Lieutenant Governor Bill Bolling, who has redefined the role of his office as a jobs creator,
policy leader, and Cabinet member, and presided over the Senate with grace. Thank you Bill for over 20 years of outstanding service.