Thoughts on a rainy winter afternoon 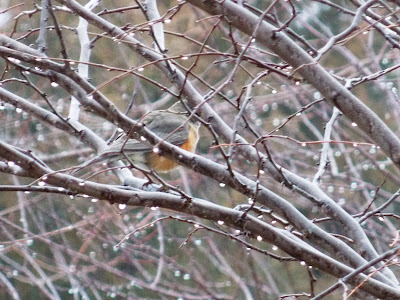 The rains began this morning before daybreak, light and misty at first. The temperature that had hovered around 22 degrees last night had risen during the night and was just below freezing in the dark of the pre-dawn hours.

By mid-morning as the rain picked up -- warnings of freezing rain were in effect from the wee hours of Sunday morning until mid-afternoon -- and the Appalachian mountain range disappeared into the lowering fog, any thoughts of going out were set aside for another day. Days like this are to be treasured in our busy lifestyles.

So instead of going out and about, we stayed home, fired up the wood stove, turned on the lights on the Christmas tree, and with feet propped up, I read the Sunday newspapers -- two hard copies as well as digital copies online, proofed a paper for a friend, wrote a blog post, got some correspondence completed, scanned Facebook, and generally enjoyed life in the slow lane.

Tomorrow the busy world will return and I must head out into the arctic freeze that is predicted to bring some of the coldest air for our area in several years but for today I'm grateful to have had nowhere to go. Hope your Sunday was just as grand.